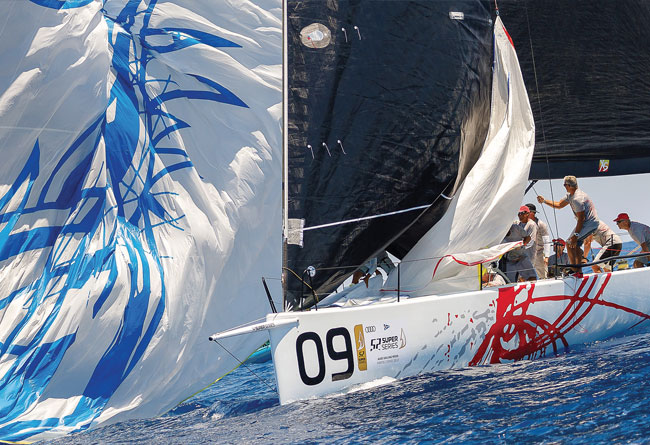 Good enough in fact that several new boats are into final planning for 2018.

Looking back on two hot and steamy weeks in Mallorca where we held the Puerto Portals 52 Super Series and the Copa del Rey, there is every reason to be pleased. In Puerto Portals we saw the fifth different winner from the five 2017 Super Series events we have completed so far: Quantum in Key West, Azzurra in Miami, Platoon in Scarlino, Rán in Porto Cervo and Provezza in Puerto Portals. Three owner-driver and two pro-driver wins.

Main picture: The talent saturating the TP52 Super Series makes a foregone conclusion of any debate about the world’s premier grand prix sailing circuit of 2017. Among those backing up owner-driver Vladimir Liubomirov on Bronenosec (to windward) are multiple Cup-veterans Ray Davies, Tommaso Chieffi, Paul ‘Flipper’ Westlake, Simon Daubney and Steve Erickson. Among the similarly gold-plated crew on Ergin Imre’s Provezza you will find Peter Holmberg driving this season, plus Tony Rey, Nacho Postigo, Daniel Fong and with former Cup skipper John Cutler in the coach boat… Not the class to turn up to after a late night

The Provezza win was special, not just because it was the first time Ergin Imre and his pro-am team took the highest stage at a Super Series event, but also because they had been close to a win twice before this year and seemed to have developed a depressing talent for sailing themselves off the podium on the final day.

Not this time, however, much to their own delight of course but noticeably also to the delight of all the other teams. This was very visible at an emotional prizegiving ceremony; Ergin is the archetypal passionate boat owner as well as a strong believer in creating time for the social aspects of our sport, like bringing family and friends to events, good crew and owners dinners, or just a decent conversation. And as such he is truly liked. Let’s say if anybody had to win this one and it is not to be ‘us’ then it should be him.

A more ‘technical’ observation I can make is that for the first time since we saw nine new TP52s built for the 2015 Super Series it seems the Vrolijk-designed boats are now on a par with the Botín designs. With statistics one can prove anything, but if we look over the past three years we saw four Vrolijk podium places in 2015 and 11 for Botín; three Vrolijk and 12 Botín in 2016; this year for the first five events we’ve had seven Vrolijk and eight Botín.

There is some bias in this as the two teams who have competed the longest in the MedCup and Super Series and are generally considered the most professional outfits, Azzurra and Quantum, both campaign Botín-designed boats.

To illustrate my point, in the past three years Azzurra and Quantum were good for 23 podium places out of a total of 45. For the overall Super Series trophies in 2015 it was Quantum 1st and Azzurra 2nd, in 2016 the roles were reversed and for 2017 it is still wide open between Azzurra (182pt), Platoon (185pt) and Quantum (188pt). I put my money on Platoon. A big responsibility for Harm Müller-Spreer, John Kostecki and friends of course not to make me look silly but with two dogs fighting for a bone…

With no easy explanation (or excuse) in the equipment any more – whether we’re talking the boats, the sails (nobody will deny Quantum is on a par with the big blue now in 52 racing, even I can see that), or the rigs (all Southern) – we can agree it is down to how one manages equipment optimisation and tuning, the team, the sailing and the expectations and emotions.

Plenty to improve still, in all departments. Equipment development will never stop. The new boats for 2018, now being designed, will undoubtedly have more potential than the 2015 generation. Possibly not straight away but they will be faster sooner or later. Sail development never stops, crews will get better.

How many new boats? More than a handful but not yet close to two hands full. Running out of building space and equipment suppliers already scratching their heads. Our industry is clearly very small if six to eight TP52s can push the limits of production…

At the (open) Copa del Rey regatta in IRC1 we saw 10 TP52s completely dominate in a 16-boat start. Other than Alegre and Paprec Recyclage these were not battle-hardened 52 Super Series teams but a good variety of pro and am sailors in a fleet of TPs and IRC52s spanning 10 years of age and with all kinds of variation in term of TP52/IRC optimisation.

Once the dust had settled the first non-TP52 was the 63ft Reichel/Pugh-designed Lucky finishing in 8th overall. The podium was made up of the 2015 Botín-designed TP Alegre in first with one race to spare, the 2008 build (ex-Artemis) Reichel/Pugh-designed Team Vision 2nd and then the 2011 build (ex-Rán) Vrolijk-designed Paprec Recyclage. The recently acquired Botín-designed 2014 build Phoenix, helmed by father and daughter Plattner, finished in 4th after a week of being on and off the podium.

As a distant observer, but on the other hand so close, having observed all these boats when racing under their first owners, it was great to hear the feedback from the teams about how much they enjoyed racing their boats and sailing the 52s in close competition. To see Andrés Soriano and his team win in such confident style, after losing a brand new rig in June (issue 451) and having a consequently tough week in Puerto Portals, certainly pleased me too. Their win with a full TP52 class rule-compliant boat in a fleet of mainly IRC-optimised 52s almost made me feel somewhat confident we are not doing that badly.

Copa del Rey is a good barometer for sailing in the Med. For sure the event, with 138 boats competing this year, is back with record numbers of competitors taking up all available dock space.

From the clubhouse the trend towards class and level racing was very visible – just looking at the rigs forming groups of masts of the same height. It was never before as obvious as this year.

If I count the 10 TPs in IRC1 as level rating and see the large number of class boats, like Swan 45s (4), 42s (3), X-35s (4) and Dufour 34s (5) racing in ORC, below the 50ft mark the one-off handicap racer appears to be on the way out, even for events of this level. On the other hand, quite a few owners still prefer the vagaries of handicap racing above being somewhat restrained by class rules and management. I just observe there is room for both tastes and, well-ruled and well-managed, both will continue to fare well.

With the grand finale of the 52 Super Series 2017 coming up in Mahón in Menorca, we will soon know the outcome of this year’s TP52 competition. We seem to be heading for quite an exciting 2018 with new teams, new boats, well-known names returning, new locations. New opportunities for sure.

For the first event and for the first time 52 Super Series will travel to Croatia and race from D-Marin’s new Marina Mandalina in Sibenik (22-27 May).

Hope to see you there.
Rob Weiland is TP52 and Maxi72 class manager