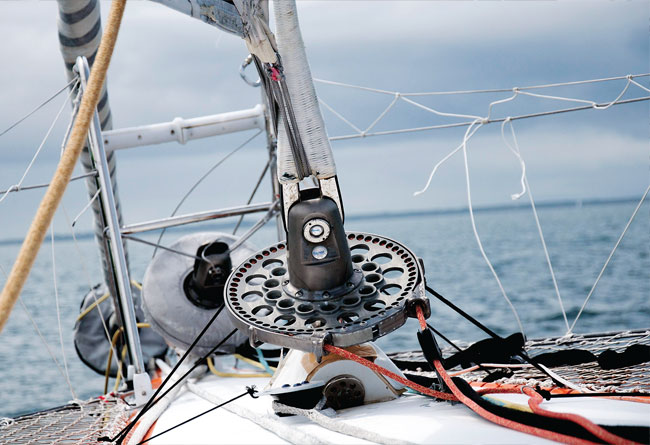 Offshore racing can offer a brutal environment, which is why those who participate seriously are always testing their limits. Equipment also needs to perform to a similar level in the same conditions but has to remain completely reliable under every circumstance. Whether a big professional programme or a Corinthian Vendée racer, failure is not an option.

Main picture: engineering as art. Simple solutions are always best. It’s amazing how long it took the sailing world to discover the larger furling ‘drum’. Similarly, the endless systems first introduced by Facnor back in the 1980s. The basics don’t change but composite cables (above) and vastly better top bearings have made for further dramatic gains in recent years. Note the covers on the most exposed furlers on this Ultime trimaran

It is in this milieu that, 35 years ago, Facnor started developing furling systems that could assist sailors in controlling the power needed to cross oceans fast, but at the same time be safe and reliable. Not an easy task.

Facnor’s engineers met these demands with expertise in not only mechanical engineering, metallurgy and composite design, but also with a spirit of innovation that only a small company can have when it is able to adapt quickly to new ideas.

It all started in 1981 when Jean Michel Despres, technical manager at Isomat, failed to convince his employers to enter a sector that he considered central to both cruising and the fast-growing fraternity of serious shorthanded racers – the headsail furler. So Despres left to found Facnor with the aim of specialising in the design and fabrication of new furling solutions, first for the leisure market then moving into the high-performance sector.

Facnor’s design team introduced a revolution in furling solutions in 1985, with a patented telescopic system that vastly improved operation under load; the same product line evolves to this day.

Soon after the first furlers appeared the same engineers turned their attention to mainsail systems, the result being the Facnor Facslide system of batten cars. This was followed by a new range of continuous line furlers plus the FlatDeck jib furler. This latter product won the Pittman prize in the Racing Gear category at the Chicago Sail Show, along with awards from SAIL magazine in the US and Segeln magazine in Germany.

At least 80 per cent of the boatbuilders in France now choose Facnor systems for their boats.

As Ronan Lucas, team manager of Banque Populaire (who have been working with Facnor for a decade) puts it, ‘We chose Facnor for the new Ultime project because they know that reliability and safety have to be the key priorities – even more so than ultimate performance. Though this too has to be at the highest level!’

What drives this innovation are partnerships with some of the world’s most prominent offshore sailors, who demand innovation and reliability to achieve the results they need to secure and retain sponsors. Facnor has also enjoyed a long technical partnership with French skipper Halvard Mabire, first on his 60-footer and now on his Class40 with his British companion Miranda Merron. Both Miranda and Halvard are experienced sailors and highly reliable technical consultants, who have continued their relationship with Facnor on their latest Class40, Campagne de France.

Facnor also enjoys technical partnerships with other Class40s as well as with ‘smaller’ racers such as Tanguy Bouroullec’s 6.50m Kerhis-Cerfrance. Facnor’s involvement in professional programmes results in valuable technical exchanges with the racers that prompts the innovation needed to further develop and improve a product line that serves both racers and cruisers alike.

Another key area of partnerships that drive innovation has been with rigging and spar manufacturers to develop systems suited to specific individual requirements. For example, as long ago as 1999, and long before such systems became commonplace, Facnor developed the first Imoca 60 furling solution that used a Kevlar fibre cable in a structural furler, with a corresponding reduction in weight aloft with no loss of strength. The cable and furler fittings and attachments had not only to match perfectly with Imoca rigs of the time, but also to be completely reliable for this most extreme endurance test around the planet.

The first major test of the system helped Michel Desjoyeaux not only to dominate the 2000 edition of the Vendée Globe, but also set a new course record on PRB with the first ‘lap time’ under 100 days. Mich’s choice of this still very new technology was a great vote of confidence for the company. Since then most Vendée Globe victories have been achieved with the help of Facnor equipment solutions.

Tanguy Redon, from the design office for the latest maxi tri Banque Populaire IX, says of the team’s relationship with Facnor: ‘Some competitors focus primarily on saving weight in these systems but that can come at the expense of safety and reliability. We are confident that Facnor will notify us when the safety coefficients are exceeded and we always listen to what they say. The collaboration is fluid and responsive, they do not remain fixed in a position. Their commitment to our project means we see this company as a technical partner rather than a supplier.’

Besides clever design, Facnor’s success relies on production techniques that are accurate and cost-efficient to always carefully match product to requirements (even the big round-the-world projects are still budget sensitive).

The process starts with prototypes that are tested on custom projects, where there is a unique need not met in the current product line. Sailors and project managers meet Facnor to explain where changes are needed to meet their use better, or discuss a completely new approach. Ideas are exchanged and a synergy develops to generate, produce and validate each new design. 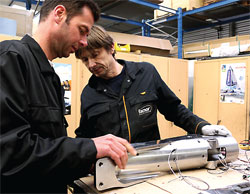 More art: one of Facnor’s larger headsail locks receives its final touches before heading off to a rather less kindly environment at the top of a superyacht mast… rarely to be seen again other than by the seagulls but needing to remain 100 per cent reliable and trusted implicitly by the yacht’s crew – most especially when cruising miles from base with the proprietors’ family or guests aboard… The latest large headstay top bearings (below) bear no relation to their early predecessors and contain a great deal of precision as well as robust engineering. Creating a furling system that will fulfil an extremely demanding set of criteria, which will perform perfectly every time under enormous load, often after sitting unused for long periods of time while saturated with salt and moisture, all demands engineering excellence, the highest quality design and absolute precision in manufacture … and then some more experience 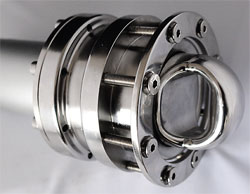 Facnor then commits to an initial design using CAD, which is translated through to fabrication before iterative development begins. This is what led to the development of structural furling systems, starting in 1998 on the Orma 60s with Frank Cammas who used an aluminium system on Groupama that weighed 72kg. This early solution evolved into the first carbon furler system, then followed by the use of PBO. In just four years we had reduced the weight of Groupama’s system to 27.5kg – with no loss in performance.

‘But the custom processes we employ are always done with considerations of later production manufacture,’ says Dominique Yon of Facnor. ‘We feel that it’s important to translate ideas that come from great racers into products that can later benefit the whole range of active sailors.’

The Facnor solution now has many complementary components:

* Facnor has been part of the Wichard group since 2013

With all this capability it’s not surprising Facnor is continually entering new markets, including halyard locks for boats ranging from 30ft to the largest megayachts. Loads in these locks can range from two tons to 50 tons, so absolute perfection is needed to match the device to the task, along with perfect reliability; failure can be not only costly, but often dangerous especially at superyacht size.

A testament to the design and reliability of the latest line of Facnor halyard locks has been its adoption by not only major superyacht projects, but also by Bénéteau in many of their models. The owner of a mid-sized cruiser-racer should be no less tolerant of failure than the skipper of the largest superyacht.

According to skipper Mike Gillespie, who has installed two 16-ton external locks onboard the 203ft schooner Athos, ‘The communication in creating both the hanging block-locks and the halyard locks for us has been excellent, with the finished product produced to an excellent standard.

‘We have now used the halyard locks countless times, notably on the RORC Caribbean 600 race with a 100 per cent success rate in locking at hoist and 100 per cent success on release. Although a challenging design, with the high safety margins needed on a boat like this, we always felt we could use the locks with confidence. For Athos we specified a minimum SWL of 16 tonnes. We have since tested the locks to 14 tonnes of static cable tension (which spikes considerably with dynamic sailing loads) and the locks still performed perfectly.’

Ronan Lucas, Banque Populaire team manager, pushes even harder. ‘We have been using three 30-tonne locks onboard BP5 and have been delighted with their 100 per cent reliability. We have now sailed the boat for the equivalent of three round-the-world trips (60,000nm) and never encountered a single problem with the locks,’ he says. ‘At this scale of yacht that is a remarkable performance record.’

So, for innovation, quality and performance in sail-handling systems, expect the Facnor team to enjoy the challenge...