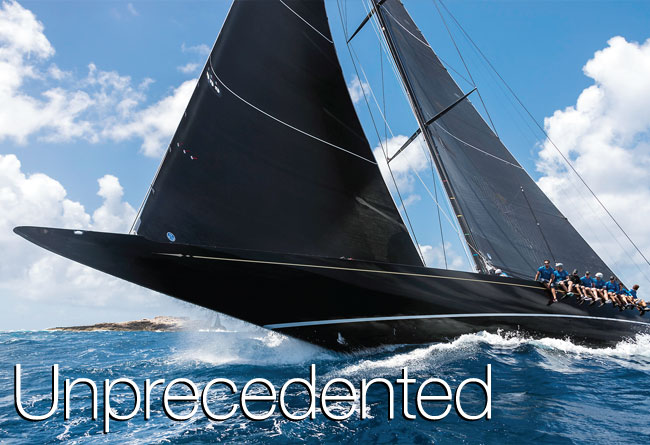 Technology among the resurgent J-Class is only heading in one direction with rig technology at the forefront of development...

In the 1930s, when the rule was first introduced, J-Class yachts were the pinnacle of world yacht racing. But by 1940 many had been stripped or broken up for scrap metal for the war effort or just abandoned and left to rot in mud berths. Decades later several of these leviathans have been rebuilt and restored and are now part of a healthy and spectacular racing class that has also witnessed a number of new builds… or ‘new old’ builds. And as the level of racing in a remarkable fleet has increased so inevitably has the demand for ‘faster’ technology. Enter Southern Spars.

Main picture: the J-Class once represented the highest echelon of ‘grand prix’ yacht racing. The best part of a century later the class is back at the top – giving a new home to dozens of professional crew whose services are no longer required in the America’s Cup. Today’s Js have been stiffened up considerably fore and aft but a lot of headstay still brings with it a measurable reduction in waterline length

As in all development classes, the Js are restricted in what modifications can be made to the platform in the search for speed – but for the rig it is a different story.

Naturally modern design, manufacturing processes and materials allow a company like Southern Spars, immersed in grand prix sailing, to make those towering J-Class rigs massively lighter than their original predecessors – most of which were fabricated in steel. But since the first carbon mast appeared in this specialised fleet the race for even lighter rigs with lower VCGs has powered inexorably onward. For example, the recent upgrade of the Hanuman rig package yielded a saving of more than 800kg across mast, boom and rigging compared with its carbon predecessor. The previous rig was built by another manufacturer just a few years ago and yet this latest weight reduction is the equivalent of removing 10 crew sitting on the second spreader. Even on a yacht this size that’s a big gain.

But Paul Snape, head of mast design at Southern Spars, says the benefits that such an upgrade offers extend far beyond these substantial weight savings.

‘A mast upgrade basically allows us to redesign the whole package above the deck,’ says Snape. ‘We carefully tailor the new design, working with the sailmakers using our in-house design software to make the overall rig and sail package better – generating more drive out of that package within all of the existing dimensions.

‘While many of these yachts were launched almost a century ago, the mast specifications nowadays are expected to be in the same ball park as the most modern race yachts,’ says senior designer and company co-founder Steve Wilson.

‘Our latest rigs for Svea and Hanuman are designed as we would a TP52 or Maxi72, with the only real extra consideration being that these yachts are usually delivered on their own bottoms so additional components like delivery sail attachments need to be factored for and designed in.

‘These boats also now have a pretty high level of aero optimisation,’ adds Snape. ‘They have internal tangs for their rigging, where the cables terminate inside the mast instead of external hangers. They also now use backstay deflectors as standard. That allows us to remove one set of check-stays, which saves a further useful chunk of windage.’

Above: big kit means a big facility in which to put it together – this is the principal assembly bay at Southern Spars in Auckland.
Below: the Js are racing alongside the AC50s in a regatta in Bermuda during this month’s big event; given the relative scale and presence of two very contrasting types of boat, non-sailors watching may be forgiven if occasionally they find themselves confused… 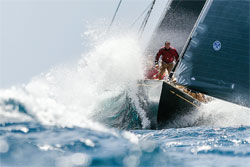 Locks also allow Southern to make the mast tubes lighter. Spar compression is one of the key loads to be resolved during design. Sailing a J-Class upwind, there can be 10 tonnes of load on the heads of both the mainsail and jib. So shifting load from halyards onto locks can remove some 20 tonnes of compression. Bear in mind the total compression in a rig like Hanuman’s can be up to 140 tonnes, so for the sake of a couple of locks the gains are substantial.

Similar efforts can be made to reduce the weight of the boom. Rotating goosenecks allow the whole boom to align with the mainsail, rather than undergo the large torsional forces otherwise experienced. Reducing these forces allows further weight to be shaved from the boom, while remaining within acceptable safety margins.

‘While these developments might not be specific to this class of boat, the design of the mast is very specific to the J-Class and the level of customisation that we can do for a given yacht, based on the way they want to sail it, is now extremely high,’ says Snape. ‘Over the last few years the technology around the bending and rolling of steel for the manufacture of mast moulds has improved drastically; today it has become practical and reasonably cost-effective for a yacht to have a specific tool built just for their mast. That is allowing further big improvements for each project.’

While all J-Class yachts are different, something they all have in common is the drive to more and more headstay tension. ‘With our latest J-Class rigs it is possible to carry up to 35 tonnes on the headstay… For Hanuman that represents a 30 per cent increase over their previous rig. Incredibly, the headstay sag on Hanuman now tops out at just one per cent (of overall stay length).

‘Conversely, such massive rigging loads now cause more measurable longitudinal deflections (bending) in the hull platforms,’ says Snape, ‘to the point where sailing length can be significantly compromised. So here as anywhere else in the sport there are trade-offs and crews need to balance a desire for better jib shape with the effect on waterline length in what are definitely displacement yachts…’

Other trends over the past few years include the introduction of carbon rigging. The benefits here over Nitronic rod are well documented. Future Fibres’ ECsix carbon rigging offers a 70 per cent weight saving in the cables alone. They are also more durable. During an experiment to compare longevity of ECsix, PBO and rod rigging, hydraulic rams were used to cycle cables 100,000 times from zero load to 50 per cent of break strength. At 80,000 cycles the Nitronic rod broke. At 100,000 cycles PBO had lost 20 per cent of its strength; meanwhile, ECsix displayed no measurable change.

The testing continued on ECsix to one million cycles. Then the cable was pulled to destruction. It broke at the expected failure load. Meaning that after one million pulls break strength hadn’t varied.

Topaz, the latest ‘new’ J-Class yacht, is the first of the fleet to experiment with another product from Future Fibres: an ECtorque torsional headstay. ECtorque offers a low-drag, high-efficiency system for deploying and dousing the yacht’s giant headsails, making mark roundings less manic and ‘slightly’ less hard work for the crew.

How these developments play out on the racetrack will be on display for the world to see shortly when the Js race alongside the 2017 America’s Cup fleet at their own regatta in Bermuda during the Cup itself. Two America’s Cup classes, separated by 85 years, side by side… It is unlikely those original J-Class sailors would have ever envisaged that happening when they were hauling up those tons of canvas by hand during the first half of the last century.