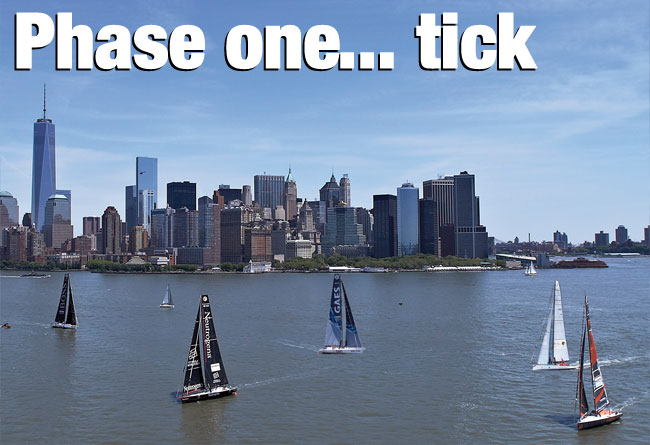 Phase one of the Open Sports Management plan to internationalise the Imoca class has now taken place with completion of the inaugural Imoca Ocean Masters New York to Barcelona Race in June, won by Pepe Ribes and Ryan Breymaier onboard Hugo Boss.

The doublehanded race between New York and Barcelona was the first event to count towards the new Imoca Ocean Masters World Championship. While there are already main major events for the Imoca class, notably the Vendée Globe and the Barcelona World Race, plus this autumn’s Route du Rhum and the biennial Transat Jacques Vabre, the World Championship intends to lend weight to other events and future events in the expanding Imoca circuit.

Since acquiring the rights to the Imoca 60 class at the end of 2012 Sir Keith Mills’ company OSM has set itself a number of objectives.

The race also included the first Chilean in an Imoca race: José Muñoz, racing with Spanish round-the-world veteran Guillermo Altadill aboard Neutrogena. The duo will be competing together again in the Barcelona World Race that sets sail on 31 December this year.

‘Internationalising the class means that we will not just be having races in Europe and the USA, but we will reach out to Asia, for example,’ says Peter Bayer, CEO of OSM, of his company’s vision for the future. ‘We will have a fleet of, say, 15 teams following a global circuit and they should be from a variety of nations and continents. Once we have reached that stage it will be a global sport and it will become one of the top sports properties worldwide.’

And this comes from a man with a heavyweight background as the former CEO of the 2012 Youth Olympic Games. Before this Bayer spent most of his professional career ‘commercialising’ snowboarding, starting as a junior marketing executive for the Association of Professional Snowboarders and ultimately ending up as its CEO. ‘That was hugely interesting – I learned a lot about host cities, relations, about how to market a sport, how to deal with athletes, how to commercialise it, how to communicate it, what the potential threats are, what the opportunities are, what the usual gaps in the planning are? That gave me a solid education in event organisation and communicating it and so on,’ he says.

Another key objective for OSM is communicating the stories from the high seas where typically a small part sees the light of day publicly.

Bayer remembers soon after taking up his appointment: ‘I had an informal dinner with a couple of skippers and they recounted some of their stories and for three hours my mouth was open! I think if we manage to take those stories, translate them into a media product, the whole world will love it. There is no one who won’t.’

To this end boats in the Imoca Ocean Masters New York to Barcelona Race carried a media crewman, with Neutrogena for example taking Andres Soriano who performed this same role onboard Team Sanya during the last Volvo Ocean Race. During the race the media crewmen provided daily reports, plus photos and video which the already shorthanded crew would have otherwise struggled to find the time to create and transmit back to land.

This content was in addition to that being produced by the media team working on the event, first in New York and then in Barcelona. Their job was to produce daily press releases and stories for the event website, create daily video highlights for the web and packages for television – all in four languages: English, French, Spanish and Catalan. This all received additional marketing support from a social media specialist tasked with increasing public engagement with the race and Imoca /OSM.

Down the line Bayer wants to standardise the communication equipment each of the boats carries, as is done in the Volvo Ocean Race. However, key to developments such as this is acquiring a naming rights partner for the class, for which he, OSM’s commercial director Alex Mills and ex-IMG newly appointed marketing partnerships director Franck Guignery are currently gunning hard.

In the meantime, Imoca has been implementing a new rule aimed at containing costs and improving safety for the newbuild 60s. These include requiring keels and masts of new builds to be one-design. In the latter instance there are different options for ‘conventional’ fixed masts and rotating wing-profile spars, the existing fleet having been evenly divided between the use of these over the last decade. 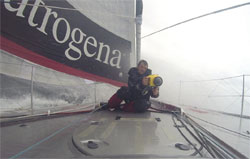 Additional rules have been introduced such as limiting maximum bulb weight (3,100kg), righting moment (25.5 tonnemetres at 25° heel), use of exotic composite materials, restricting the number of waterballast tanks (down from eight, or more, to four) and their volumes reduced. Gone is one of the ancient cornerstones and typeforming parts of the Imoca rule – the '10 degree rule’, used to limit the amount of movable ballast via a static test where the boat must heel by no more than 10° with all its ballast deployed.

The aim has been to simplify the boats while ensuring that the power-to-weight ratio of new boats remains similar to that of the existing fleet. However, coming up with the right numbers to ensure that new builds are neither slower than the existing fleet, nor too much faster, has caused delays in the final publication of the rule.

Despite this, the latest rules have done little to dampen the appetite of teams choosing to build new boats. Publicly announced teams at present include Banque Populaire, Safran, Gitana, Hugo Boss and St Michel Virbac. While Hugo Boss has yet to announce who will be behind their next boat, the rest are to be designed by VPLP-Verdier, who penned Macif and Banque Populaire, the first two boats home in the last Vendée Globe.

Hungarian Nandor Fa this spring launched the first boat built to the new rule – Spirit of Hungary, the solo round-theworld sailing legend and former Imoca president’s third Imoca 60. This made it to the start of the Imoca Ocean Masters New York to Barcelona Race but, despite arriving in New York, didn’t compete. Unfortunately the boat was found to have suffered delamination in the slamming area of its hull forward during its delivery trip.

At this stage the teams and designers are remaining secret squirrel about how their new boats will look and any developments we’re likely to see in them. The majority of the new-generation boats are set to be launched in 2015 to be ready at least a year ahead of the next Vendée Globe.

Click here for more information on the the IMOCA Ocean Masters »