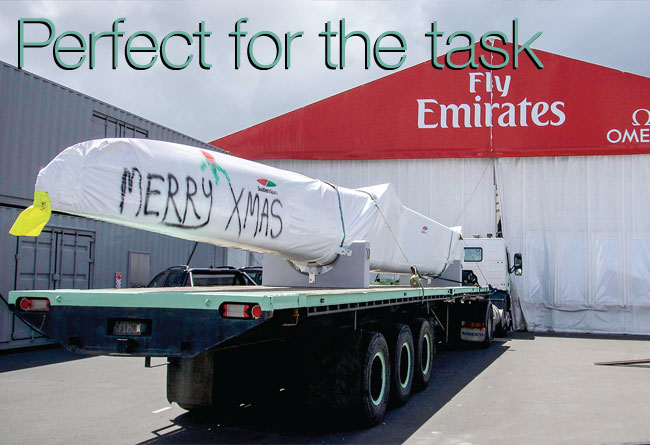 When Emirates Team New Zealand were placing the order for their latest America's Cup challenger where could be better than a 'local' company with a worldwide reputation for delivering long, thin carbon structures...

Building an AC50
Southern Spars have been building some of the best masts in the world for more than a quarter of a century, and for their first few challenges outside the realms of masts and rigging they haven’t lowered their sights even a fraction.

Equipped with some of the best minds and hands in the world of composites, in mid-2016 the company set out to flex their design and manufacturing muscle outside the world of carbon spars. The first challenge they took on was revolutionising track cycling wheels for the New Zealand Olympic Track Cycling Team. Southern’s R&D and production teams produced a set of 32 wheels, which helped the NZ team set the fastest opening lap of a velodrome ever recorded at sea level and take home a silver at Rio.

‘I absolutely knew we could do the job,’ says Hauser. ‘We are perfectly set up, we’ve got one of the best carbon fibre manufacturing plants in the world, and some of the best guys to do the job.

‘Our relationship with Southern goes back a long way,’ says Team New Zealand CEO Grant Dalton. ‘This is our sixth campaign together, so we knew that we could trust them to deliver. Their skills in carbon manufacturing – be it masts or anything else – are of the absolute highest standard. Producing the rest of the yacht at Southern Spars became a natural choice because of the experience and skills they have on offer.’

Southern were already building two of the complex 23.6m wings for Emirates Team New Zealand when it was confirmed that they would build the most technologically advanced yacht that New Zealand – and potentially the world – had ever seen. At this point progress on the first wing was very advanced. It was delivered well in advance of the raceboat so that it could be used in training and development on their 45ft test boat.

Much smaller than the AC72 wings that Southern Spars built in the last America’s Cup cycle, the ACC wings must adhere to rules that govern the overall shape, weight and centre of gravity. The main spar, or leading element of the wing, is also one-design. However, within a defined planform, the design of the three trailing elements is left to the teams, finding the balance between flexibility that lets the sailors manipulate the shape of the wing, against strength and reliability.

Building two ACC wings took Southern’s production teams some 15,000 man-hours. Adding the hulls, daggerboard cases, aerodynamic fairings and detachable bow sections to that piled on another 14,000 hours. The total job was ‘equivalent’ to one person working a normal 40-hour week for more than 15 years.

Main picture: on weight, on time… on budget, the Emirates Team New Zealand ACC raceboat arrives home in time for Christmas – the boat with which the New Zealand challengers aim to right the wrong of losing the 2013 Cup Match in the most painful manner imaginable. Other teams are aware that the political and financial hurdles with this challenge will just make Dalton’s team that much harder to beat 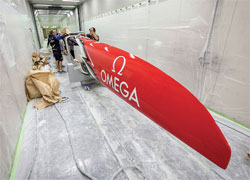 Quasi one-design maybe, and with tight restrictions on build spec and materials as well, but the builder still plays a big part in this year’s ACC contest. There is a weight range of 200kg for the latest Cup boats to allow leeway for boats coming from different yards. The fibre and cores used have all been supplied and controlled under the ACC rule so there’s little wriggle room there; but the better the build quality, the better the weight distribution and, crucially in a multihull, the rigidity of the platform, especially measured in terms of torsional deflection under load. No place for amateurs… 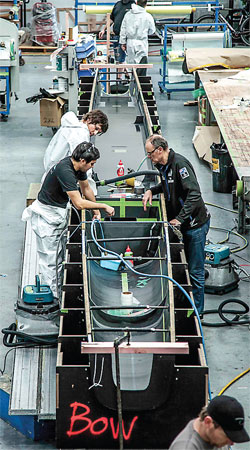 The protocol for this America’s Cup also dictates that each team has identical hulls, built from moulds provided by the defender. The port and starboard hulls are a mirror of one another, so moulds for only one side are required for the build, with two hulls being popped off the single-set moulds.

To maximise efficiency and ensure build accuracy, Southern Spars set up the moulds inside one of the big ovens at their 10,000m2 factory in Auckland. The inside of this oven is 3m wide, 4m high and 25m long. It is usually used for curing superyacht booms and America’s Cup wings… but it is also perfect for building a 15m ACC multihull.

A large dedicated clean-room was erected adjacent to the oven so that material preparation could occur close by with staff working inside the oven, laying fibre and core into the moulds. ‘Having the clean-room right there and the moulds locked in place inside the oven made for a much better build,’ says Steve Birdsall, the project’s build manager. ‘It meant all the materials were in an environment we could control in terms of temperature, humidity and contaminants.’

Aligning and fixing the moulds in place in the location that the hulls would be cured guaranteed maximum accuracy in the finished product. It also removed any risk of movement or misalignment in the laminate that might occur while shifting the moulds between lamination and curing locations.

As with the size and shape of the hulls, their fibre content is also defined by the America’s Cup Class rule. Predominantly 150 and 300gsm-weight fibre with aluminium honeycomb core was specified by the Cup Protocol. Aluminium honeycomb is higher performing than ‘traditional’ Nomex, exhibiting better stiffness and strength properties. However, the cost and the fact that, when left in a salt environment for extended periods, aluminium honeycomb will react with carbon, resulting in corrosion of the core, mean it is not normally used in building boats. For the ACC yachts this is not an issue. They are hauled out each day and actually spend very little time in the water…

Because of the tight restrictions on the type of fibre used in the build, Southern were unable to use their most advanced carbon technology. Deep inside the Southern Spars factory is a carbon fibre plotter, which allows them to place the thinnest layers of carbon at any orientation they desire with extreme accuracy and speed. (While the Emirates Team New Zealand ACC yacht met the weight tolerances of the rules – between 2,232kg and 2,432kg (the use of TPT thin ply carbon would have made the yacht even lighter.)

Once cured in the oven each hull was brought into a special fit-out area for assembly, where bulkheads, floors and cockpits are completed, and the top and bottom halves of each hull are joined.

Both hulls were painted on site by Southern’s paint team. They were lined up end to end inside the company’s very large paint booth, which is temperature, pressure and humidity controlled to create an optimal painting environment. The booth stretches 62m, making it the longest paint booth in the southern hemisphere. Well accustomed to working within weight guidelines, the paint team measured every millilitre of paint that went into each coat, ensuring the hulls did not deviate from their specified weight targets as they progressed through the final stages of production.

Emirates Team New Zealand’s ACC yacht is one of the most technical yachts ever launched – a challenge that Southern Spars stepped up to and met with great enthusiasm. ‘For us this is another opportunity to demonstrate how strong we are as a composite manufacturer,’ says Hauser. ‘Our staff and facilities are as good as or better than any other composite manufacturer anywhere. We have just built a yacht that is capable of winning the America’s Cup.’

And the customer seemed happy too… ‘Southern Spars are always reliable for getting a top-quality job done on time, which is hugely important for us,’ says Kevin Shoebridge. ‘Spar building is a very precise and controlled process, components are built to tight specifications and weights, and so on, so we were completely confident that our own “long and thin structures” would be delivered on time and down to weight.’