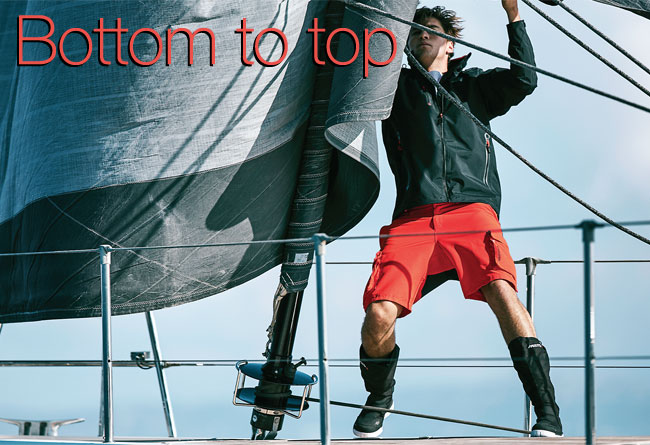 Not the obvious choice, recruiting a swimming champion to help keep your clients' feet dry... but it all seems to have worked out rather well

Main picture: OK, so Chris McGrath, the head of footwear and accessories at Musto’s technical division, is not just a pretty good swimmer, he also worked for many of the world’s best-known athletic clothing groups; so it is no surprise that when he hooked up with Volvo Race winner Ian Walker to define a new generation of ocean sailing footwear they came up with something that ticks all the boxes…

Above: those old-school blue canvas sailing shoes are now de rigueur for today’s fashion kids… but they are rarely if ever seen on the water (OK, other than maybe worn by stewards on a large and similarly fashionconscious superyacht). Today’s best performance deck shoes are much closer to what you will find at your local running track, yet they have to meet a vastly wider and in some ways very much more demanding set of performance criteria. To those still going afloat even in the best traditional ‘deck shoe’, go get some - thing less medieval. Leather deck shoes are fantastic, but when you’re trying not to slide around, sweating on the end of a winch handle, you really need to treat yourself…

In his youth McGrath was no mean athlete in his own right, winning a bronze medal for Great Britain in the Open Water Swimming World Championships in 1994. But since then he has forged a career with an enviable CV in the global sporting arena. ‘I started out working at the McLaren Formula One team for three years, working in 3D design creating gloves, helmets and so on. That’s when I really began to work closely with athletes, listening carefully to what they want. Often you find sports people are frustrated designers; they have some amazing ideas, but you’re the link between that creative spark and bringing it to reality.’

Since McLaren McGrath has worked at Speedo, Nike, Puma and Clarks. It was while working as head of design at Clarks Shoes that he first came across Musto. ‘I already knew the brand pretty well because of my wife’s involvement in the equestrian world,’ says McGrath, ‘but we were doing a collaboration with Musto in the lead-up to the London 2012 Games. That’s when I realised the potential of the wider sailing world, and the power of the Musto brand in particular, for creating top-performance products that the best sailors in the world want to wear.’

The past year has seen McGrath and his design team working hard on the latest footwear which now appears in the 2017 catalogue.

Much of the new boot is an evolution from Musto’s long history of ocean-racing footwear but nearly every element has been upgraded and improved in some way. The Gore-Tex membrane makes the boot waterproof and breathable so your feet stay completely dry. Feedback from bowmen – who frequently work in a firehose of fast-moving white water while kneeling on the deck – told McGrath that the previous system needed improving as water could seep in through the back of the boot as they were crouched on the deck, so now an adjustable gaiter minimises water getting in through the top of the boot and XPL drainage expels any water out at the ankle to prevent pooling.

‘Testing is what takes the time, it’s the most important thing we do,’ says McGrath. ‘I want the guys to wear these things to death, to really tear them apart so that we can make them better and stronger and build more longevity into the material. Sometimes the sailors will come back with some great ideas from other products that they think might work elsewhere. For example, on the new Ocean Racer boot the Cordura fabric on the gaiter is the same material as you find on the seat and knee patches on HPX salopettes. That brainwave came from the sailors’ feedback from the last Volvo Ocean Race.’

Dynamic Fit
The Dynamic Fit Gilly cords and lacing system close around your foot to lock it in place. It prevents sliding inside to give incredible stability and a sure stance.

Closed Cell Technology
The molecular structure of the mixed rubber compound in the heel prevents microbial growth for odour-free performance and a surface that is easy to clean.

A lot of work has gone into reducing weight in this boot. ‘Rubber is pretty bomb-proof and it’s unbeatable with regards to water penetration. But it’s also very heavy, and not the most nimble product. So now we have a mid-sole and outer-sole.’ The mid-sole is very light, taken from running shoe technology, and it provides underfoot protection which minimises vibrations through the bottom of the shoe. An impactresistant EVA foam midsole and footbed both absorb shock and repel the cold transmitted from the deck to prevent rapid heat loss in cold-water conditions such as in the Southern Ocean. It also means the amount of rubber used on the outer sole can be minimised, stripping out unnecessary weight.

The design team developed a new GripFlex sole pattern which is mathematically engineered for 360° grip and traction. Combined with Musto’s GripDeck sticky rubber sole, this is the most versatile and reliable grip yet developed. ‘The sailors want great grip in all directions, for it to be comfortable, protective and as lightweight as possible. When they’re trying to operate in 30ft swells they want to be able to move around easily and not feel as if they’re planted on the deck with massive, clunky boots.’

Also helping to minimise bulk is an adjustable gaiter, which makes it easier to get in and out of the boot and gives a better fit for different calf sizes. The gaiter incorporates scratch rubber which is well proven in the climbing world, and provides great durability and grip. ‘The adjustability of the gaiter makes it easier for putting on salopettes over the boots and generally reduces bulk below the knee,’ says McGrath. ‘The more dynamic the user feels, the more they’re integrating with their product, the less cumbersome and more mobile they’ll feel.’ Once the boots are on, there is a bungee lacing system that locks your foot in place to give you the best possible support and stability.

Dynamic Pro II
Among many innovations on the Dynamic Pro II, solving ‘stinky shoe syndrome’ was one of the biggest challenges. ‘Getting rid of the smell is really difficult,’ says McGrath. ‘You can treat shoes and garments but unless the treatment is impregnated it will wear off. Part of the solution comes in making the shoe as quick-drying as possible. The holes in the outsoles generate airflow and improve drying time, as does the mono-construction of the Dynamic Pro II. With the DP1 there were three layers of mesh but they weren’t bonded together. This means the bacteria can hang onto more surface area, so for the DP2 we have welded those three layers together, which helps reduce the possibility of bacteria hanging around and makes it a more compact piece of footwear.’

Like the Gore-Tex Ocean Racer boot, the DP II incorporates the same GripFlex sole pattern which flexes and contours to the contact zone for 360° grip and traction. McGrath says it has been designed to operate well in transition zones between two different types of surface, for example where a GRP surface or carbon-fibre decking meets trampoline netting.

Pete Cumming’s experience onboard all kinds of fast multihulls such as MOD70s and foiling GC32s has been invaluable in developing a close-fitting, lightweight deck shoe that works in a variety of conditions and environments. ‘What’s great about this industry compared with other footwear industries is that these guys are sailing all year round, so you’re getting good feedback all the time. We’ve got a great pool of guys who are really keen to use the kit and try it and tell us what they would like.

‘There’s a huge amount of trust in the Musto brand, and we’re lucky to have a loyal base of athletes who really believe in the brand and the product. For me, while I’ve worked for some of the biggest names in the sports industry, this is a career highlight, to work so closely with guys like Pete and Ian creating products they’re going to love using in the toughest environments.’