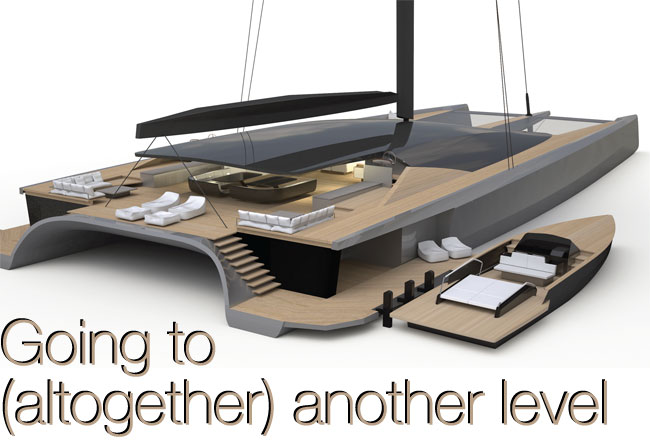 Racing multihulls are continually setting new performance benchmarks, with the fastest trimarans likely to be covering 1,000 miles in a day within the next decade. Now imagine putting this kind of performance into a superyacht. Even with a 25kt cruising speed, 10-15kt slower than that of the speediest maxi-trimarans, this still equates to 600 mile-days or an ARC crossing of just 4.5 days – substantially quicker even than, say, Rambler 88’s ARC record of 8d 6h…

Such feats will be possible with the new BlackCat catamarans, conceived by multihull legend Mitch Booth and penned by Malcolm McKeon, one of the world’s foremost sailing superyacht designers.

Currently available in 35 by 14.3m and 50.4 by 18.5m versions, the BlackCats meld state-of-the-art engineering and design with high-tech composite construction, the end result being an unprecedented combination of luxury and performance. As Mitch Booth explains: ‘It is the natural evolution of materials, engineering and structures. You have to build a multihull like this in composites if you want it to perform.’

Multihulls are slowly gaining acceptance thanks partly to the America’s Cup going two-hulled, but also to the positive experience people have holidaying on them. The steadily reducing cost of carbon fibre also makes such a large platform more feasible fiscally.

The main challenge of creating the BlackCat multihulls has been their design and engineering. The (multi) million dollar question is how to ensure the structure is adequately strong while keeping the boat light enough to ensure a lively performance – because nothing kills performance in a multihull like weight. As a result the extensive structural maths carried out by our engineers has the BlackCat 50 weighing in at 193 tonnes.

This might be substantially more than the 40m Banque Populaire/ Spindrift 2 trimaran’s feather-weight 25 tonnes, but it is around half the weight of an equivalent 50m monohull superyacht, while offering an interior volume and deck area more comparable to a 60m craft. (Aluminium was discounted – a 50m aluminium BlackCat would weigh 50-100 per cent more).

Main picture: Roll the clock back even 10 years and if you had gone into a sailing bar and announced that you would create a futuristic super-luxury yacht that looks like the boat above, and that it will easily cruise at 25 knots plus, well, the barman would have politely taken your car keys and rung for a cab. Bold design, allied with today’s best materials and boat building techniques, are enabling a completely different scale of high performing ocean-going cruising yacht. Fun to sail too… 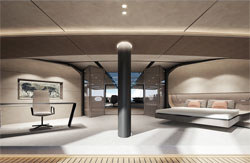 Above: take your average 50m superyacht, then using your cursor carefully drag the same boat out to a beam of 18.5m and then get to work with Milanese interior designers m2atelier… having also briefed them that this is one ‘very large yacht’ that will not only stay level when sailing but, unlike its motorised counterpart, will also see very little unpleasant motion when at rest. And note too that the space above is the ‘honeymoon suite’, not the main salon… oh, that’s much bigger. As for the outside, imagine that (below) sliding over your maxi ‘racer’ as you cross the startline in Antigua.

As its present weight the 50m BlackCat’s ‘cruising speed’ will be 25kt and, as Booth says: ‘If you push the boat a bit harder, you can get into the mid-30s with a top speed close to 40kt, which is quite possible given the length of the boat. 30kt for a multihull of this size is not extreme.’

Even a specialist high-speed motor yacht would struggle to maintain such speeds, particularly over any distance, and of course would come with the high price of countless tonnes of fuel being squandered. And while it is hard to believe until you’ve experienced it, doing 25-30kt on a 50m multihull feels like you are standing still, which would not be the case on any other form of waterborne craft.

Also vital to the BlackCat’s performance calculations is of course righting moment, as this determines the loadings throughout the boat and ultimately its sailing weight. To keep righting moment sensible for a long-distance cruising yacht, the BlackCat 50 has a relatively modest beam of 18.5m… although this is still similar to Steve Fossett’s 38m PlayStation, the beamiest catamaran ever built.

Also, while the BlackCat is still structured to withstand flying a hull, there are mechanical measures in place to prevent this. If she heels more than 6°, safety mechanisms will kick in, releasing valves on all the sheets, easing everything instantly. While it is highly unlikely that what is effectively a giant raft would ever capsize laterally, let alone pitchpole, these measures are a further safeguard to keep everyone at ease in bad conditions.

As with all of Malcolm McKeon’s designs, aesthetics are central and the Lymington-based design house has even managed to get the 50m catamaran to share some common styling points with their popular monohull superyachts. In short, unlike some other big catamarans which resemble wedding cakes, with multiple levels, flybridges, etc, the BlackCat has just a single level on the bridgedeck. This, combined with her length, makes her one of the sleekest catamaran designs out there. It also means the boom is not several storeys up.

The BlackCat’s hull design is contemporary, with reverse sheer bows and low-volume foredecks to ensure the bows readily pop up when they inevitably bury in a wave. The topsides also have the concave, sucked-in, ‘been to the gym’ look seen in some of today’s best sportscar designs.

A vital feature, both for structural and sea-keeping reasons, is the central ‘flying hull’ running longitudinally up the centreline. Structurally this enables fore and aft rig tension to be cranked up, thereby improving upwind performance. Simultaneously, the underside of this element helps provide a curved surface beneath the bridgedeck to minimise the effects of slamming, which at best can be a bane of life onboard cruising cats or at worst result in structural disaster. Forward, there are beams between the central spine and the hulls, but these have little structural consequence and principally provide an attachment for the trampolines.

The amount of interior space – around 340m2 or close to 1,000m2 including deck areas – is staggering. On the 50m the hulls alone have a beam of 4.3m so spacious cabins can be fitted inside them. One of the arrangement options has quarters for the 10 crew in the port hull, four double guest cabins in the starboard hull plus a master stateroom, 18m across at its maximum, spanning the breadth of the bridgedeck and offering a panoramic view forward.

An 18m-wide stateroom would only be possible elsewhere on the world’s very largest superyachts. So one imagines that such a feature would make the BlackCat a big hit in the super-luxury charter market. As Booth observes: ‘On most superyachts if you have 20 guests, there is still often not enough space in one area to seat your whole party together for a meal. Instead there are lots of little spaces scattered around the foredeck and aft deck and on different levels. On the Black Cat there is just one big open space that flows through the whole boat.’ This space could comfortably host a party of 100 people.

A vast acreage of glass has been designed into the superstructure, which McKeon says will benefit not just the bridgedeck saloon, but the cabins too: ‘We’re carrying the sides of the superstructure over the top of the cabins which will bring natural light straight into them.’

While about the only downside of such a boat is the cost of stern-to berthing, there are a legion of additional benefits – not least the lack of heel when sailing. As McKeon observes: ‘When these big superyachts go out with guests, especially elderly ones, they can feel very uncomfortable with the boat heeling to 25° or so. With this boat you are heeling at 6° and going three times faster…’ Plus, the ‘raft-like’ nature of the big catamaran means it has little tendency to generate its own rolling motion when at anchor in a swell.

Arguably the biggest benefit of the catamaran configuration is draft, or rather the lack of it. While a 50m monohull might draw 6m or more, the 50m BlackCat is fitted with skegs (on which she can, in theory, dry out) giving her a draft of just 2.4m. Retractable daggerboards and rudders (the engine prop shafts also retract) can increase the draft to 4.8m.

As a result, the BlackCat can anchor in more protected waters, closer to the shore, making for more comfortable nights onboard as well as facilitating boarding. This also enables access to many marinas and smaller ports. As McKeon says: ‘You can park this superyacht on the beach while the kids swim ashore. And you’ve got so many areas where you can relax, sunbathe and spread out.’

With the BlackCats such cuttingedge boats, Booth and McKeon have sensibly chosen to work with top contractors and suppliers with, wherever possible, the maximum amount of relevant experience. For example, North Technology Group will provide the rig and sails and Harken the captive winch and deck gear, while Baltic is the builder.

The BlackCats will be constructed entirely in pre-preg carbon fibre with either foam or Nomex core as appropriate – Baltic Yachts was selected as the yard as it has already produced some of the world’s largest composite monohulls, including the biggest of them all: the 67m Hetairos.

In some areas the BlackCats could offer even higher loadcases so, for example, the yard’s previous experience in how to cook 50mm+ solid carbon laminate will prove invaluable. Baltic will build the BlackCats in several sections and cunningly intends to leave the topsides off while the interior fit-out is completed – this will allow much easier access through the boat than the traditional way of gaining access via the deck.

With the launch of the BlackCat 50, Baltic will not only have built the longest carbon fibre yacht in Hetairos but now the widest boat.