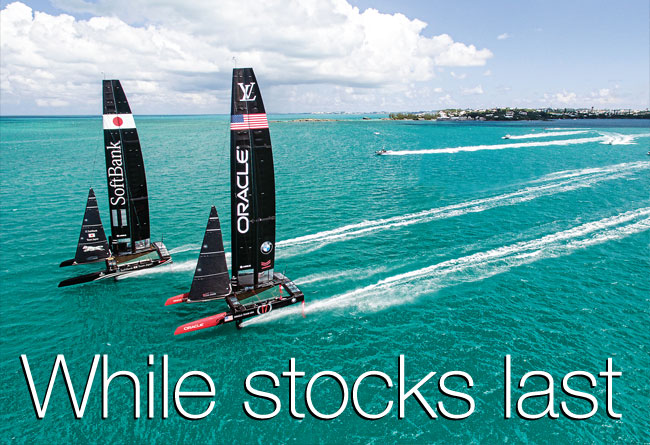 This summer in Bermuda promises to give us the most dramatic America's Cup in the event's history... and the ticket store is open

In its 166-year history the iconic America’s Cup, the competition for the oldest trophy in international sport, has probably never featured a stronger line-up of teams. The yachts that will be raced are also comfortably the fastest in the illustrious history of the ‘Auld Mug’, and Bermuda’s Great Sound is the perfect stage on which to run the greatest race on water.

Tickets for the events, running in Bermuda from 26 May to 27 June, are becoming some of the hottest properties in world sport and they are available now from www.americascup.com/tickets.

In 2017 there will be six teams competing to win the America’s Cup, starting with Defender Oracle Team USA. With skipper Jimmy Spithill looking for a historic ‘threepeat’, winning the ‘pitbull’s’ third America’s Cup following victories in 2010 and 2013 (more of which later), his team have to be among the favourites.

If Spithill can pull off that historic three-in-a-row he will have to be in serious consideration for the title GOAT, Greatest Of All Time, but will that pressure takes its toll?

From Great Britain, Sir Ben Ainslie and Land Rover BAR are on a mission to right the wrongs of 166 years of hurt and finally bring the Cup home. Sir Ben is a winner, proven in competition time and again, but now he and his royal supporters want the America’s Cup back home in the UK where the story started in 1851.

Another iconic English sailing hero, Lord Nelson, once signalled ‘England expects every man to do his duty’. Now the same is true for the great British public which expect the all-conquering Sir Ben Ainslie and Land Rover BAR to make good on their goal and deliver them the Cup. No pressure.

Representing Japan is SoftBank Team Japan, a small, tight-knit family who might just be the dark horses of the pack. Kazuhiko ‘Fuku’ Sofuku, the vastly experienced Japanese team manager, also known as Sensei, has helped foster a strong Japanese culture in the team, and Dean Barker, skipper and CEO of the Asian powerhouse, is determined to right the wrongs of the 34th America’s Cup. That was the campaign in which he competed with Emirates Team New Zealand and which produced, arguably, the greatest comeback in sports history.

This was in 2013 and Barker and the Kiwi team were looking nailedon certainties to take the Cup back to New Zealand, having established an 8-1 lead over Oracle Team USA on San Francisco Bay. It was at that point that Barker and Emirates Team New Zealand’s world started collapsing around them, Oracle gradually clawing their way back to 8-8, and then finally winning 9-8 and retaining the America’s Cup.

Barker clearly has a score to settle, but so too do his highly motivated former teammates at Emirates Team New Zealand, and they have to be up there as a major contender, especially when looking at their vast well of experience. Helmsman Pete Burling knows how to win – two Olympic medals in the 49er class including gold at Rio 2016 prove that conclusively, but does he have what it takes to handle the pressure of the America’s Cup and break the Kiwi voodoo in 2017?

From Sweden there is Artemis Racing, the team led on the water by Nathan Outteridge, the honey badger of the America’s Cup – calm and laid-back, most of the time, but ruthlessly aggressive and can beat anyone when threatened. Alongside Nathan are the passion, experience and tactical skills of Iain Percy, one of Britain’s greatest ever competitive sailors, now helping spearhead the Artemis Racing challenge in 2017.

Main picture: There are probably almost as many different views on the new-look America’s Cup as there are racing sailors in the world, but no one will argue that using 50ft ACC platforms that are capable of producing closing rates approaching 100kt – more than 100mph – will offer an extraordinary spectacle… 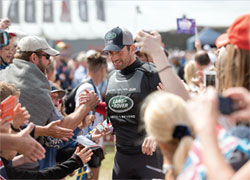 Sailors as rock stars… or much more accurately sailors as warriors. Win, lose or draw (OK, a draw is unlikely), Ben Ainslie (above) and 2013 America’s Cup-winning skipper Jimmy Spithill (below) are going to leave Bermuda in July with a wider and very much more diverse fan base than when they arrived on the island to start their Cup preparations in earnest… a nice bonus 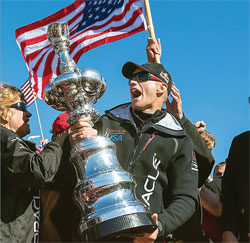 In the Louis Vuitton America’s Cup World Series, Artemis Racing would win one race, then finish last in the next, then win two more races, and then finish sixth. That sort of all or nothing attitude does not show the consistency needed to win a world series, but it does mean they will be worth watching and, if their consistency is as impressive as their boatspeed, on the basis of early skirmishes, then they have a very decent chance of becoming the first ever Scandinavian holders of the America’s Cup.

That only leaves Groupama Team France, one of the youngest teams in the 35th America’s Cup but skippered by Franck Cammas, among the most gifted and successful of the countless gifted and successful French racing sailors! The French team were late arrivals to Bermuda, the fifth team to set up their base in the home of the 35th America’s Cup, but they are quietly confident they have what it takes to win for France.

Franck Cammas nearly lost a leg in a training accident in 2015 but bounced back to lead his team in the Louis Vuitton America’s Cup World Series, and did not waste a second throughout his recuperation, spending his time studying more about the science of the boats that will race for the 35th America’s Cup. Expect to see the French team emulating their celebrated skipper and pushing everywhere they can to emerge victorious at the end of June.

That covers the teams, so now let’s take a look at the boats they will race. In 2017 it is all about the innovative ACC boats. The ACCs are technical marvels. Catamarans that measure a fraction under 50ft in length, the lightest possible carbon/aluminium honeycomb hulls, a large and extraordinarily complex wing sail, more akin to the wing of an aeroplane than a traditional sail, with the ability to fly above the water on foils – and potentially stay there for an entire America’s Cup race without once touching down. An ACC boat is bad, cool... and astonishingly fast.

That foiling capability is the most eye-catching element of an ACC boat, enabling them to race at speeds close to 50kt and foil both upwind and down. The teams all now agree, mere weeks before events start at 5pm on 26 May, that staying up on those foils will be the key to winning the 35th America’s Cup.

All teams are foil-tacking regularly, and, among their overall training programmes, they are all now working on fine-tuning directly related details such as the rake angles of the platforms themselves to maximise the performance of the foils in the water. This is the sort of attention to detail needed by an America’s Cup team in 2017 to compete, let alone to win.

As much as ACC foiling capabilities are incredible, it is under the skin of the boats where the really astonishing technical developments are concealed, which will play a major role – if not the major role – in winning the 35th America’s Cup in Bermuda.

The grinders on an ACC boat are the vessel’s engines. Their efforts power the numerous hydraulic systems that activate all of the systems onboard, generating the hydraulic power that will in turn be harnessed by skippers, helmsmen, trimmers... in fact, whoever onboard needs to access the power that will keep their boat aloft and fast.

The compelling backdrop to all of this is the beautiful island of Bermuda and the America’s Cup Village, hub of the 35th America’s Cup. Bermuda is everything you dream of in a perfect destination. Warm weather, crystal clear waters, pink sand beaches and a Bermudian welcome that makes you feel at home the second your feet touch hot sand.

The America’s Cup Village is Bermuda’s home of the Cup. There is a range of tickets available that will take you into the heart of the action in Bermuda’s Dockyard, from general admission to grandstand seating, from the party atmosphere of the Goslings Dark ’n’ Stormy Island Bar to the VIP world of the Longtail Lounge, there is an option to suit every budget. And if you want to watch on the water there are spectator boat packages and private boat registration.

In short, the 35th America’s Cup has you covered.

Click here for more information on The America's Cup »