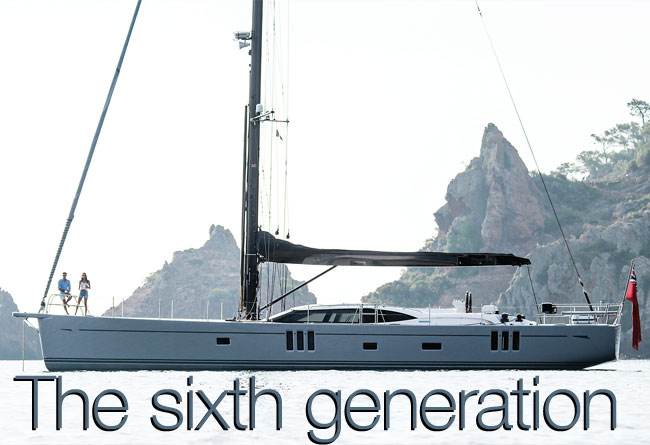 When builders point to the greater volume of a new model over its predecessor the risk is that the increase has been achieved at the expense of looks. More volume rarely leads to better aesthetics. Yet Oyster’s G6 range marks a step forward in both areas, delivering sleeker, more modern appearance while offering significantly more space above and below decks.

But the new style is much more than simply a smart exercise in creating a good-looking, voluminous boat. Since the G6 range was first announced in 2012 the project has been an ambitious one that extends from the new flagship of the fleet, the 118 that is currently in build, through seven models, to the recently announced 565 and 595s. A comprehensive new lineup that is arguably one of the boldest in the company’s history. There are certain details in the G6 approach that stand out immediately.

Stepping onto the new 745 (above) most noticeable is the sleeker, lowerprofile deck with its tinted, wrap-around saloon windows. The landscapeoriented ‘seascape’ hull port lights are another signature of the new marque. Cleaner-looking, clutter-free decks are also part of a new style, as are sail plans that incorporate blade jibs, bowsprits, swept-back spreaders, full-width chainplates and carbon rigs.

And when you drill down into the detail on deck, the arrangement of control lines that run back discretely to cockpit-mounted rope clutches makes for an intelligently laid-out configuration that is easier to use, while relying on fewer winches than would traditionally have been the norm. Leading the jib sheets aft in this manner has also addressed the issue of keeping flogging lines away from the guest cockpit!

But this is still a long way off the full story behind the development of the G6 range. Instead, the starting point for the project was the gradual change in the size of boats that owners were happy to handle themselves and the way in which they used them. The increased volume that is a feature of the G6 range came from a different area of development.

Frequently new models are developed as owners look to move up in size and, while the G6 fleet will provide a natural progression for those looking to trade up, it was not the manner in which the new range was conceived. Rather, the development came the other way, with lessons learnt in much bigger models providing the cues for smaller boats. And the model that triggered the change was the Oyster 100.

Her length means that she has to comply with the marine and coastguard agency large yacht code (LYC) which, among other details, sets out minimum dimensions for some of the accommodation. The net result is this professionally run 100-footer has two cabins for crew and just three for guests.

Owners of, say, a 56 or 575, who have no crew to cater for and will be used to having four cabins for themselves and their guests, would be justified in questioning the appeal of a boat that is almost twice the length but has less guest accommodation.

It was this that triggered a new approach.

The starting point was to create a design that was close to, but not exceeding, the lower limit of LYC compliance, resulting in the 885. From here the designers looked at how to make full use of the voluminous hull from an accommodation point of view while at the same time using the fuller form to boost performance. In essence this came down to a subtle shift in the distribution of buoyancy to generate more righting moment and hence more power, yet without increasing wetted area.

From here a towing tank program at the Wolfson Unit in Southampton provided validation of the new hull shape. A fuller form in the after-sections also lends itself to twin-rudders which in turn offer other benefits including reduced draft, reduced drag and more efficient performance, particularly upwind. All of which was again validated in the towing tank.

When it came to the accommodation layout, the new shape and greater volume allowed some fresh thinking, starting with options for two different superstructures; this gave us scope to create a greater choice of cabin configurations and a variety of layouts to suit both professionally crewed and owner-run boats. The concept was repeated aboard the 825 and then the 745. 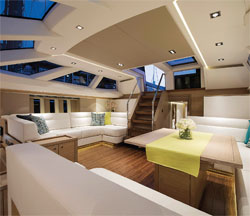 Step aboard any one of the current crop of G6 models and you will see the changes first hand. Having sailed the 745 (and being familiar with the previous generation, in particular the 56), it was easy to feel the difference with the new fuller hull and twin-rudder configuration. Upwind in 10-15kt of breeze she has a balanced feel, one key to a successful twin-rudder configuration. Downwind, with large gennaker set, she maintained the direct feel with plenty of grip, even when pushed hard.

Below decks it’s again clear to see where the 745 has taken her cues. Most notably with the dual companionway forward either side of the mast. To starboard there is a guest cabin, while to port the longitudinal galley also provides a passageway forward to the crew accommodation.

Having two passageways forward was an idea that was taken from the 825 and allows crew and guests to move back and forth freely without having to pass through each other’s areas. Another innovative detail is the sliding panel and door on the galley side that allow the galley and crew accommodation to be closed off completely from the guest accommodation. Particularly useful when chartering.

From the 745 evolution continued ‘downward’ with the development of the 675. Once again the additional hull volume plus the new style allowed designers to develop new layouts while incorporating some of the lessons learnt aboard her larger sisterships.

The latest models to join the range are also the smallest in the G6 range, the 565 and 595. Embarking on two new models, both with new and individual hulls, has been another bold call for the company. Despite being almost half the length of the former flagship that prompted the new approach, these two fifty-something footers carry the same DNA as the bigger boats in the range. They have twin-rudders, bowsprits, blade jibs and the same rig configuration as their bigger sisters, yet these boats have been specifically designed for family sailing and to be easily handled shorthanded. Indeed, when the experience from owners and crews of a growing round-the-world rally fleet was factored in, Oyster believe they have been able to bring a new level of design refinement to the whole G6 range.

The experience gleaned from these rallies suggests that owners are happy to utilise modern design and tech - nology to make boathandling easier. As such, boat sizes have grown while crew sizes have shrunk. Today it is common to sail long distances with four rather than six. Some are sailing the same-sized boats but as couples. This has freed up space below decks and allowed a different approach to the overall layout.

So while the outward appearance continues in a similar style, the interior layout sees new ideas including the option of moving the owner’s cabin forward to the bow with twin guest cabins aft, plus an extended transom (left) with integral dinghy garage – all made possible by some subtle tweaks of the freeboards. A forward owner’s cabin is particularly attractive for Mediterranean sailing where mooring stern-to is now the norm.

The next wave of G6 launches will follow over the coming 18 months at both ends of the range. The first 118 is expected to launch in December 2017 with handover in spring 2018. The first 565 will be launched in 2018 too, with the 595 following in April 2019. By then Oyster’s G6 range will have expanded in more ways than one, yet not at the expense of good looks.