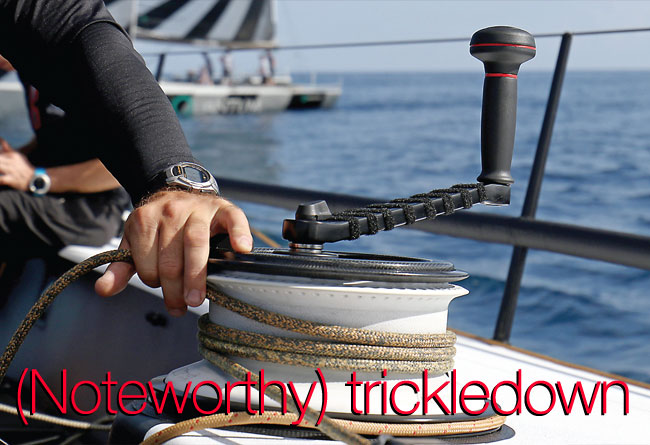 It’s not all about solenoids, actuators and electronic feedback… Harken’s Air Winch is one of the exciting early spin-offs from America’s Cup 2017

Much has been said about how the new multihull America’s Cup has not contributed much to the development of mainstream big boat racing, and this is not untrue: very little of all that clever work that went into spar, sail and boat design and fabrication over decades of Cup racing is being developed any longer to produce a trickledown benefit for the larger racing audience that still enjoys monohull racing. However, there is one supplier to the AC programmes who has been consistently adapting to the new platforms and tenaciously innovating to find solutions, and some of these ideas have proved to offer tangible benefits to the broader racing public: Harken.

A lot of focus has been placed on faster hydraulic systems to transfer energy in the controls on AC foil and wing systems, and Harken is a clear leader in this field. Yet Harken has also been active on more traditional line-handling systems, of which the Air Winch is one of the most significant innovations (Air Winch was a category winner at the 2016 Dame Awards – the most important competition for new concepts and designs in marine equipment).

Developed to handle the single ‘mainsheet’ to the wing on the AC50, the Air Winch had to deliver a light, strong, reliable and versatile all-inone package. ‘During the last Cup the teams used different models of our winches for the wing – a sure sign there was an opportunity to develop a dedicated winch for wing trimming,’ said business director Mark Wiss. 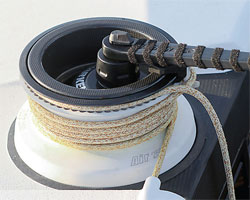 All those years that we have been carrying around heavy winch innards – of course it’s not quite that simple but the elegant simplicity and load-carrying benefits of the new ‘winch-with -a-hole’ from Harken do look so obvious it’s a wonder the approach has not been tackled before in earnest. Outside the current Cup teams the first ‘public’ installation was seen on the new and rapid Botín designed TP52 Interlodge, now renamed Gladiator 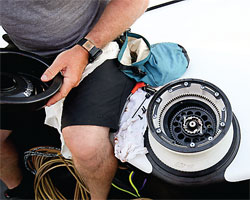 To meet this challenge Harken looked within its own product line, where the Air Blocks have already proved popular and reliable in a wide range of applications. Applying the same design principle to winches has meant a complete redesign to create not only an entirely new look, but a new range of functionality and efficiency not found in other winches.

The first noticeable feature of this winch is its large, low-profile 200mm ceramic-coated drum and open middle – this is a first in sailing winches, but makes perfect sense to push the bearings out towards the perimeter of the drum to reduce the loads and friction in the system. The large diameter also means more surface area for grip, meaning fewer wraps for faster tailing, while the low profile further reduces weight and windage.

The other key feature of the Air Winch is the interchangeable gearing modules that can be swapped out to change ratios without unmounting the winch. Kits are available to produce seven gearing options in first speed and six in second. This versatility enables the sailor to optimise power and speed for variables in weather and crew configuration. As sailing conditions and crew change, so can the winch gearing within minutes – like a race car crew replacing tyres.

‘The lack of a separate base element meant we could sink the winches into the deck to keep their weight as low as possible,’ he said. ‘A surrounding monolithic laminate structure makes the whole as strong and as light as possible. We reckon we saved over 10kg across the four winches’ – a huge benefit in a class where every gramme is counted.

In practice Matthews reports they have so far stuck with standard gear ratios as they get used to their new boat, but will move to multiple gearing in due course. ‘Without even trying the different gear options yet, just going from 150mm drums on our previous 650s to 200mm we noticed an improvement in our hoists, drops and gybes,’ he says. This elegance in design and function will surely come to be regarded as one of the more worthy trickledowns from this latest cycle of this America’s Cup.

Click here for more information on the Harken Air Winch 250 »