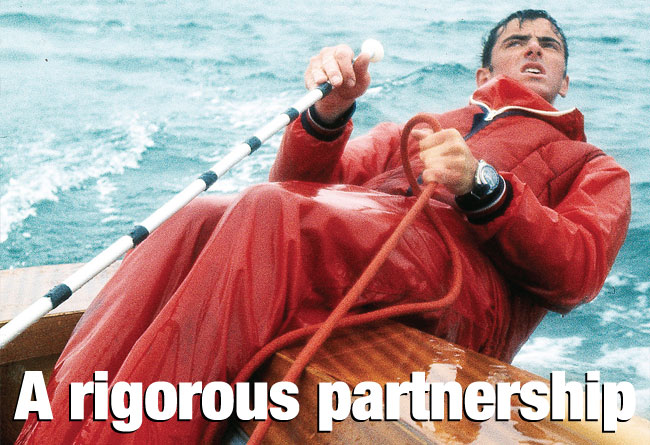 Held every four years, the Sailing World Championships is the largest gathering of Olympic class sailors. At the 2014 edition in Santander, Spain, more than 1,100 sailors from 82 nations attended with tens of thousands of spectators taking to the promenade and spectator dune.

Main picture: A good sailor, an even better coach and with a doctorate in small boat tuning… David Howlett plus weight jacket (old school, kids) seen here sailing his Bungy Taylor Finn ahead of the 1976 Games, went on to unparalleled coaching success with Iain Percy and Ben Ainslie who with his help and guidance won six gold medals between them

At the opening ceremony a reported 40,000 people gathered at the nearby Campos de Sport de El Sardinero and were treated to cultural performances to symbolise the importance of hosting an event of this nature. The Santander 2014 Worlds perfectly married up the spectacle of sport and leisure, placing them side by side in a beautiful setting.

As thousands enjoyed the show, there was some exceptional competition on the water as the worlds marked the start of the journey to the Rio 2016 Olympic Games. Fifty per cent of the countries on the Rio startline qualified their national slots in Santander, two years before the Olympic Regatta itself began – highlighting the importance of the event.

For Rio 2016, once the International Olympic Committee (IOC) had confirmed the 10 sailing events and the athlete quota, World Sailing then worked closely with the Olympic organising authority to ensure the qualification system for the Rio 2016 Olympic sailing competition reflected the key IOC principles. The Santander 2014 Sailing World Championships, the individual Olympic classes world champion ships in 2015, plus a nominated series of other major international regattas in 2015 and early 2016 provided the qualification pathway for Rio 2016.

World Sailing has always adopted the principle that it is the nation that receives the quota place and not the athlete. So at the Santander 2014 worlds and the different 2015 class worlds the best-performing nations were able to secure quota places and then at a later stage allocate those places to their best athletes. At the continental qualification events, held in 2015 and 2016, there were also specific quotas of places allocated to each continent in each of the 10 Olympic sailing disciplines.

Just four nations qualified in all 10 events – France, Great Britain, New Zealand and the USA. Alongside the qualification events, the World Sailing qualification system guaranteed host nation places for Brazil in all 10 events and provided four IOC ‘tripartite places’ (two each for the Laser and Laser Radial) to ensure that the world’s smallest National Olympic Committees (NOCs) are able to qualify to the Games themselves.

Tripartite places were awarded to Angola, Bermuda, Cayman Islands and St Lucia. Ultimately, it is the NOCs that decide whether quota places are used or not and for Rio 2016 five NOCs rejected quota places – Australia, Canada, New Zealand, Norway and Sweden.

The qualification process for Rio 2016 was deemed a success by World Sailing and the IOC and core principles of the system have already been adopted for the next Olympic Games, to be held in Tokyo, Japan in 2020.

For sailors the journey to Tokyo 2020 will begin at the Aarhus 2018 Sailing World Championships in the Danish city from 30 July to 12 August 2018. Aarhus 2018 is the first and most significant qualification event for the Tokyo 2020 Olympic Games with 40 per cent of the nation quota places available across all 10 Olympic sailing events.

The other allocated places will be decided at the 2019 Olympic classes world championships and a further series of continental qualification events.

World Sailing is in the process of finalising this qualification system which will be completed by the time that the IOC confirms the full event programme, for all international federations, for the Tokyo 2020 Olympic Games in July 2017. Once World Sailing receives confirmation of the sailing events and the athlete quota we can then work to finalise the qualification system in conjunction with the IOC, ensuring that the key IOC principles are once again reflected.
Alastair Fox, director of events