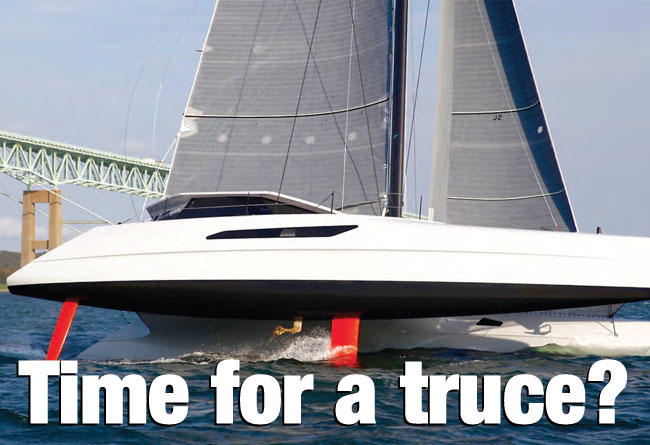 Designer Gino Morrelli is growing concerned about how ‘high performance’ these high-performance multihulls have now got...

As designers of high-performance catamarans we get called upon to design or upgrade ever more powerful performance racer-cruisers. As a result, we have been privileged to be in the front line of an increase in large (45-70ft) multihull participation in coastal and day race series worldwide, and particularly in the Caribbean islands races – while also enjoying the camaraderie fostered by these events.

We are also seeing (and have been actively involved in) an escalation in the arms race to build and turbo-charge these highperformance cruisers, to the point where they rival the performance of some dedicated raceboats of just a few years ago. As a point of reference, during the 2016 Caribbean circuit the Gunboat ocean cruisers Tribe and Elvis, with their mix of family plus a few professional crew, were on more than one occasion finishing in front of the fully professional team on the VO65 Brunel.

Exciting, yes. But the direction of travel is beginning to be a concern to us. We believe it is time to call for a truce. So this article is our attempt to advance an idea that we believe will ‘improve the breed’, benefiting the owners of these impressive machines and the multihull industry in general: the creation of an internationally accepted handicap rule for these sophisticated performance yachts.

The evolution and improvements in mainsail materials and battens over the past 10 years have been dramatic. Fourteen years ago Morrelli Melvin (MM) originally helped conceive and designed the South Africanbuilt Gunboat 62 and 66 with sailplans that featured pin-head mainsails. These sails had moderate roach, supported by full-length battens, but terminated in a conventional 10in-wide headboard.

As sail technology evolved to the current state of more powerful – often carbon – fat-head sails, those small headboards have been replaced by horizontal heads that are nearly 12ft wide! Expressed as a percentage of boom length, mainsail head widths expanded from 3% to some boats now sailing with 45%.

These fat-head/square-top mainsail improvements drove owners to purchase these new sails, to immediately improve their boats’ light and medium air performance. In the case of a typical Morrelli Melvin-designed Gunboat 62/66 this lowered the hull flying speed from 24-25kt true wind speed (TWS) to approximately 20-21kt TWS.

Once the engines (mainsails) became turbo-charged it became necessary to change the wheels (daggerboards) to handle this increased power. Using the Gunboat 62/66s as an example, as originally conceived, the daggerboards on these designs were not exposed above deck when raised, due to aesthetic considerations. When fully lowered the shorter daggerboards were supported beneath the deck at the sole level and at the bottom of the hull.

These boards worked well enough with the smaller, less powerful pin-head mainsails. However, with the adoption of fat-head sails the under-deck shorter boards could not harness the power of the new sails. So due to our recommendation, and design assistance, these boards began to be replaced with much longer, stronger, higher-aspect (and more costly) daggerboards, now supported at the deck and keel, along with more sophisticated bearings. These enhanced board systems were expensive, but the return in performance was significant. And with the additional traction the hull flying speeds were lowered yet further...

Concurrent with these changes, improvements in batteries, electric winches and hydraulics were employed on the boats to help handle the increased power. But these powerful systems have been disguising today’s huge sheet loads behind the push of a button. The physical effort involved now only rears its head when reefing and manoeuvring, but even then it remains largely disguised by the improved technology.

As an example, I recently sailed the Gunboat 62 Elvis using a handheld wireless remote to control the hydraulic mainsheet and the electric winch-driven main traveller… while hull flying. A brave new world.

The net result is that the boats are now much faster upwind and down. The hull flying speed has decreased further to the point where a MM-designed Gunboat 62 turbo like Elvis in race trim now flies a hull, with a full hoist fat-head mainsail and self-tacking jib in just 14kt TWS. And this is a boat that was conceived for fast long-distance cruising. 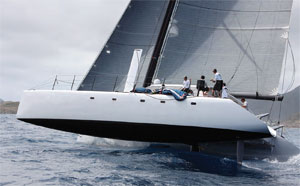 World cruisers, cruiser-racers, really? Well, you’d certainly expect so from this typical Gunboat interior (below) with its inside forward helming station. But with a bit of added grunt and a crew able to fully employ all the considerable righting moment, these boats now come alive in surprisingly little breeze. The latest Gunboat 57 VaiVai (main picture) is all carbon-epoxy with lots of titanium hardware, while the Gunboat 62 Elvis (above) has been heavily turboed including deeper foils and a much bigger sailplan with a large fat-head main 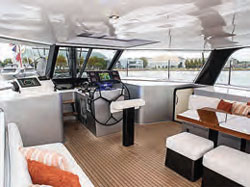 In a similar case, we recently assisted in the completion of the MM-designed Gunboat 66 Extreme H2O, which is now being raced in California, designing enhancements that take the performance a couple of steps further. These include adding a giant masthead overlapping jib, flown off the mid-point of the sprit and supported by masthead hydraulic running backstays. Also added were long asymmetric curved C-boards and T-rudders. Even in fully loaded Transpac mode this is a machine that can fly a hull in approximately 10kt TWS…

Now that we have racer-cruisers that can hull fly – ie capsize – in less than whitecap conditions, it’s getting serious. Hull flying is fun and safe on a boat with a well-designed deckplan and steering station, which allow the helmsman fingertip control and the crew instant release of sheets. Good visibility and contact with the apparent wind are also essential.

A number of our existing MM-designed Gunboat 62/66s with forward cockpit steering are quietly adding tillers aft for just this reason. And our latest HH Catamaran designs are offered with different helm configurations for these same reasons. And while boats like Elvis have had the good fortune of developing a core crew who have had time to adapt, and learn to control this incremental increase in power, it is not a situation that one sees with crews who are new to this level of performance.

So in discussions with owners, boat captains and crews, I’ve now begun to share my concern that we have reached a point where we need to start putting a cap on this arms race.

What I am recommending is the development of a rating system that effectively handicaps and limits the race for ever higher performance with boats that were conceived as dual-purpose, using the current hull fly speeds of the GB62 Elvis or the GB66 Extreme H2O as examples of possible benchmarks. I also sailed Extreme H2O with its conventional self-tacking jib in race trim and we started to fly a hull in just 12kt TWS.

Most coastal and day-racing currently takes place using a variety of handicap systems administered by local organisers. These systems vary in complexity and application. Creating an internationally supported system for this style of boat would go a long way to allowing multihulls of varied manufacture and design to compete fairly.

With the huge input of brains and money into the last two America’s Cups, multihulls of all types are benefitting from substantially improved Velocity Prediction Programs (VPP). By utilising these improved VPPs designers can now accurately predict boat speeds based upon measurement of sails, boards, rudders, hull and weight, allowing relatively fair handicaps to be created.

No single handicap system will ever be perfect. Boats all react differently to different wind spectrums and sea conditions. However, if we can develop a handicap system that begins to cap today’s arms race, and gives us relatively fair and transparent ratings, I think that we will quickly start to see greater multihull participation in existing regattas as well as the acceptance of multihulls in those classic races such as the Newport Bermuda and Sydney Hobart races from which they remain excluded.

But change flows both ways and to get this greater inclusion we also require the help of the broader multihull community to establish safe parameters and validate any new system in order to promote multihull participation without introducing undue risk.

There are organisations like the Sailing Yacht Research Foundation that have already reached out to the multihull community – largely at the prompting of more active board members like Stan Honey and Steve Benjamin. SYRF might be a good choice for a nonpartisan organisation to spearhead this effort. Owners, designers and builders can all contribute and leverage SYRF’s pre-existing database of aero and hydro research to help with the development of a professionally supported multihull handicap rule.

In addition to the possible involvement of SYRF one of the big cat builders recently began exploratory discussions with the IRC rating system managers at the RORC in Europe.

The America’s Cup has brought much attention to multihulls. We now have a great opportunity to harness the growing energy and interest in large multihull racer-cruisers to create a unifying handicap system that will bring some sanity to what otherwise threatens to become a situation best described as uncontrolled technical development… accompanied by an escalation in risk and cost followed inevitably by negative press.

I think this is an idea whose time has come. An idea that will benefit the current crop of owners and protect their investments, will encourage new owners by presenting a manageable, level playing field and will be good for the multihull community in general.

We at Morrelli Melvin stand ready to donate our time and database to an effort of this sort and invite other designers, equipment suppliers, sailmakers, mast and boatbuilders to contribute as well.

Individual owners, skippers and crews will also add a great deal to this initiative, in particular helping to identify what is desirable in each area of necessary compromise between the benefits to individuals and to the broader multihull community. Let’s work together to make this happen.
Gino Morrelli, Newport Beach