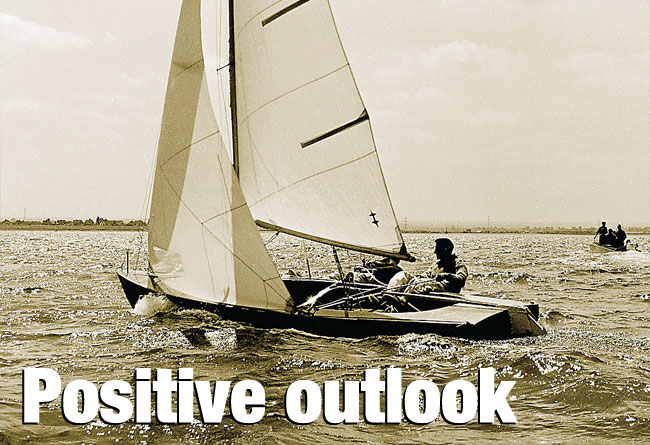 Seahorse: What made you consider running for this new position?

Main picture: Before modern 18-footers and Kevlar 505s appeared, followed by the 49er in the mid-90s, the magnificent Flying Dutchman had for over 40 years remained the only racing dinghy to fully plane upwind – as opposed to in short bursts. This is Keith Musto (the same) and Tony Morgan sail testing before heading off to the 1964 Olympics in Japan where they won silver. Aggressively long battens in that mainsail… even way back in medieval times

Kim Andersen: Sailing is a sport with so much potential, we are a life sport. But I truly believe that we can also be a global sport, one that is attractive to participants of all ages and especially the youth. But over the years there was a growing sense of frustration among our members – the potential of World Sailing was not being fulfilled. There also seemed to be a lack of clarity in the process by which World Sailing was making decisions and this was impacting on the commercial success of the sport.

So a combination of these factors were my primary motives for running for World Sailing president, and I subsequently based my manifesto on these three areas which cover these key issues:

SH: And when did you decide to actually put yourself forward?

KA: I put my name forward for president in July 2016. I had quite a lot of members asking me to run so I decided with my knowledge of our sport combined with my business experience I could contribute to the future success of World Sailing.

SH: And your overall ‘pitch’ philosophy…

KA: The team at World Sailing has a lot of experience, and I believe that by combining this experience with the right focus we can do many great things. There are a few early priorities that I would like to implement with the support of the World Sailing board and input of Member National Authorities (MNAs) around the world; among them is working collaboratively in a clear and transparent manner.

I believe that having a tighter focus will help us to work in a more co-ordinated and efficient way. Already just saying that these are areas we want to work on has allowed us to better engage with our members – and the hope is that this way of working will also help in bringing in new commercial partners.

SH: Do you bring specific expertise in certain areas?

KA: The sailing culture in Denmark – where I am from – is focused around being a part of a development process from start to finish. Meaning that it’s not just about getting in a boat and sailing, but understanding the efforts that go into building the boat, testing the boat and so on, all the way up to sailing it. When I first really got into sailing it was because I had just helped to build my own boat. I believe this experience and cultural background have allowed me to understand what is required to take the helm of World Sailing.

Furthermore, having lived around the world, as far away as Australia and just across the border in Germany, has given me new perspectives in working methods. I hope to use this, combined with a passion for sailing plus my business experience, to get the best out of our organisation at both strategic and operational levels.

That said, a key part of my platform is based on involving our MNAs better in our major decisions. They are the ones who know the challenges in their countries; our role should be to support them in overcoming such challenges. I have only worked closely with Andy [Hunt, CEO] and others at World Sailing for a relatively short period, but I already have great faith in their abilities.

SH: Long term, where should the classes’ focus lie…

KA: Our principal events should always be linked to the grassroots – and over the years the classes have been the glue that has kept all our events going. Let me be clear, we need to keep our classes, but we also need to explore ways to support new disciplines because this is where we can grow sailing and increase the appeal for the public. It would be great to show off different ways of racing to drive expansion; for example, team, match and a champions’ league are all good ways to activate a newer type of sailor.

SH: So what about narrowing down the top of the sport with its numerous ‘world champions’?

KA: First we need to be better at developing the heroes, for example Olympic champions and the Vendée Globe, Volvo Ocean Race and America’s Cup winners. All have great stories to tell but they really need our support in promoting themselves to the wider audience.

Our ability to use technology is another factor in engaging with the public – the last America’s Cup and Star Sailors League are great examples of good technology being used to promote sailing. It would be wonderful if we could find a structured way to get this technology into the Olympics and our Sailing World Cups.

SH: And what of the growing talk of a two-handed, mixed- gender, long offshore medal in the Olympic regatta…

KA: If it were possible, in the first instance I would love to see endurance sailing trialled as at least a demonstration sport.

SH: The Youth Worlds seem to have slipped in visibility in recent years…

KA: Personally, I don’t agree. For example, in Denmark awareness of the event has recently been growing – since a proper feeder structure was put in place there has been plenty of new interest.

SH: Finally, when you get any time, what sailing will Kim Andersen be doing in 2017?

KA: I have sailed Dragons for many years now… Officially I have stopped, but last year sailing with Jens Christensen and Rene Villefrance we won the Marblehead Trophy… hopefully they will invite us back this year to defend our prize!


Kim Andersen was talking to the editor