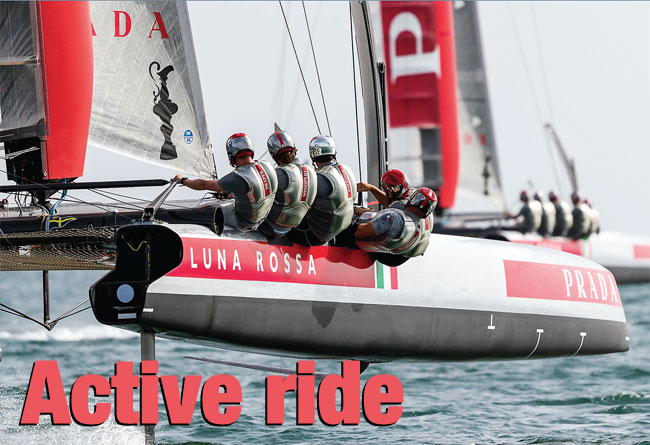 Very much more refined than the technical systems that have been keeping the AC45F foilers aloft in the America’s Cup World Series, James Boyd has been looking into what goes on below deck on the real thing… the AC50s that start to go afloat this month

With the America’s Cup going increasingly near one-design with the latest generation of 15m by 8.48m foiling catamarans, the focus for each campaign’s technical team has narrowed considerably. Given that engines are prohibited, the power for the winches and all of the various hydraulics now comes from four of the six crew; one key area under close scrutiny is ensuring that this ‘human engine’ operates at all times as efficiently as possible. Obviously the fitness and physiology of those manning the pumps are vital, but also the powertrain design and execution, the choice of equipment and the operation of the hardware that is ultimately being driven.

With the advent of wings, the America’s Cup is no longer the fiscal Christmas that it once was for sailmakers; for a while it looked worryingly as though it might be going the same way for winch and rope manufacturers with the new America’s Cup Class. In the event AC50s still have one pair of winches, to control just two pieces of rope – the wing sheet (compar - able to a combined mainsheet/traveller on a conventional mainsail) and the halyard for the self-tacking jib. The other controls on board, for the wing, the foils/boards, the jib sheet and – new for this AC – for adjusting rudder rake, are operated by between 13-15 hydraulic rams of dramatically varying shapes and sizes (several teams including Land Rover BAR initially also experimented with pneumatics for high speed, high range of travel functions such as the board up/down controls).

The need to go hydraulic, as opposed to following a traditional rope route, is that there is simply too much for a six-man crew to manage, let alone manually drive in any other way, given the impressive 50kt speed potential of the latest foiling cats.

The size of the human engine may have shrunk with the reduction in boat size from the AC72s used in San Francisco, but a welcome new development for the 35th America’s Cup is that the use of hydraulic accumulators is now permitted, although restricted to the various axes of movement of the appendages. So now the boats have effectively a hydraulic ‘battery’ where excess power from the grinders can be stored. In addition, this time hydraulic pressure has been limited to the relatively low figure of 5,000psi. This is aimed at containing costs by allowing teams to use off-the-shelf accumulators, rather than having them waste resources in developing custom gear.