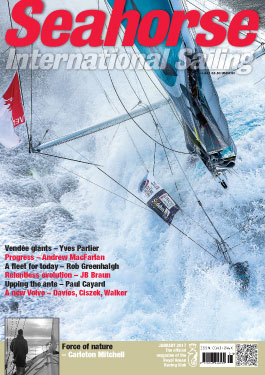 Planning ahead
New boats and races but for now the rules stay the same… and that’s the secret. ROB WEILAND

Twenty five years of progress? – Part 1
ANDREW MACFARLAN of Red Bull, sailor, yacht designer and now one of the top names in F1 composites, takes his own look at how the two technical sports have been evolving

We’ve missed you
After a lapse of far too many seasons the One Ton Cup is back in play, now being competed for in the (fast) Fast40+ class. And both the class and its biggest event are thriving. ROB GREENHALGH

Small and perfectly formed
Former skiff world champion, Volvo sailor and now Fast40+ class president Rob Greenhalgh has been working closely with Paul Roberts at Customised Composites to develop a better batten solution for today’s much more demanding sailplans. It all started with the Moths… but now it’s gone a whole lot bigger

The best of (spring) times
One of the world’s best regattas is also one many racing sailors may never have thought about… until now. But even while it was below the international parapet, Charleston Race Week, with its combination of great racing and even greater beach parties, was steadily growing. It is now the biggest keelboat regatta in the US

World news
Vendée here Vendée there, but right now there is no bigger story in sailboat racing, not just the sailors and the race but the technical developments that promise – or threaten – to reshape offshore monohull racing. Plus ‘almost’ a TP52 and winning in Toulon. IVOR WILKINS, BLUE ROBINSON, PATRICE CARPENTIER, DOBBS DAVIS, CARLOS PICH, NATHAN OUTTERIDGE, GAVIN BRADY

IRC column
Whatever rating system you may prefer, the results at the end of the Middle Sea Race were something quite remarkable. JAMES DADD