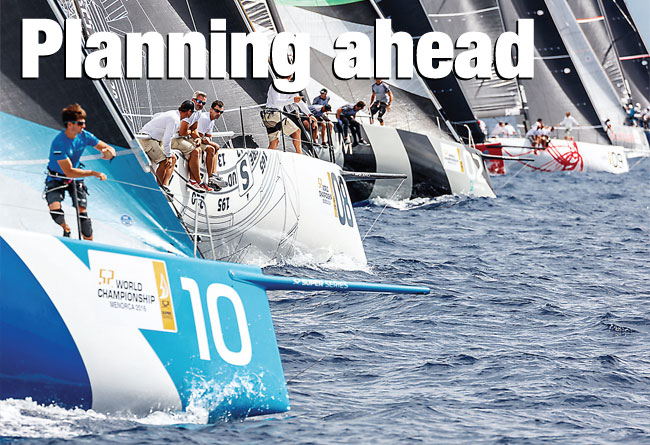 New boats and races but for now the rules stay the same… and that’s the secret. ROB WEILAND

Super is not as over the top an adjective for the level of the TP52 racing that we are about to witness in 2017 as it perhaps was in 2013. Back then it was more an indication of ambition than a reality. 2017 brings a six-event no-discard series spread over two continents with at each event 12-14 top-notch TP52s fighting it out with a level of evenness that you will struggle to find in a one-design fleet; yet each TP52 is individually designed, built and optimised and is always ‘in development’ to address real or perceived weaknesses.

Main picture: Azzurra win the pin as eventual series winner Quantum go for their characteristic mid-line start during this year’s TP52 Worlds in Menorca. Rigorous enforcement of rule stability is a key factor in this class’s continuing success; all changes are agreed well in advance so boat owners can accurately predict the competitive life for a new build or for an expensive round of modifications

The status quo is constantly challenged and as a consequence we witness ever-changing relative performances between the boats till the final race of the year. If it was the hardware only it would be complex enough, but of course how the teams work is equally important – and as complex as the science behind the equipment.

Will we see the same teams and boats as we saw in 2016 when we start 2017 with Quantum Key West Race Week? The simple answer is no.

All the teams are using the few months between finishing the 2016 series in Cascais and the first event of 2017 in Key West to optimise crew and boat. Many are optimising rigs, continuously learning since the 2015 introduction of composite rigging for class racing and keeping pace with its development ever since.

It will be interesting to see the first of a new-generation Southern Spars TP52 rig on the soon to be launched Interlodge. A new section shape has been developed reducing aerodynamic drag and improving stiffness compared with the previous generation. The improved inertias of the new shape also facilitated re-allocating laminate for an improved bend distribution, of course respecting the total weight and centre of gravity limits of the TP52 Rule. Also fittings and attachments have been overhauled in design.

All in theory, so far, the proof of the pudding is in the racing to come. Interlodge, the first new boat of 2017, designed by Botín Partners, will surely be the main focus of attention in Key West. Certainly for the teams trying to make up their mind about whether to build new for 2018 or for 2019.

As agreed between the class members, there will be no rule changes of any importance for 2018 but very likely steps will be made towards an even lighter and faster TP52 for 2019. It is the aim to decide those changes in the first part of 2017 so the teams planning to build new can make an educated decision whether a new boat for 2018 can be made both to be a step forward in 2018 and then easily modified to the 2019 rules without compromises.

How much lighter will we go? Think of 200kg for a 6,800kg displacement. Increasing the square-head of the mainsail and adding mainsail area is another obvious topic for debate.

Also obvious from a wider perspective but not all that easy to implement is to discuss introducing a cleaner means of propulsion, replacing our trusty fossil-fuelled Yanmars with an electric-powered motor and battery pack. Not to make a huge impact on the environ - ment in a direct way but hopefully contributing indirectly by setting an example if not declaring a fashion statement. Just as Tesla now produce multi-functional solar roof tiles why can our industry not make multi-functional solar racing sails to have us surfing along at 20kt and charging our batteries at the same time…

The new Interlodge is rumoured to have its rig slightly further aft in the boat. With that many other items will also have moved. Will we see a reversed bow? I guess not as the rule’s tumblehome restrictions prevent us from incorporating a reverse bow as part of an optimised aero-friendly front part of the hull. Possibly something to discuss for the 2019 rule change?

But for sure we will first discuss how that will affect the current fleet. In the rare photos of the Interlodge under construction the deck looks to be more bulbous than the 2015-generation Botín designs. This would be in line with their new Maxi72, the soon to be launched Cannonball. It is the Botín philosophy that more camber reduces aero drag and increases global hull stiffness. The Botín office now have new CFD software to test aero features and this is influencing their latest designs.

Expect the removable bowsprit to be more aero-friendly, integrating more fully with the deck and carrying a nice downward curvature to reach the class rule minimum height at the tip. The cockpit has been completely redesigned. Interlodge is bristling with recently developed Harken hardware, which helped trigger some of the new deck layout ideas, or was it the other way around? It is good to see the industry is not resting on its laurels, even with relatively few true racing yachts currently under construction.

With the teams showing so much energy, the 52 Super Series cannot lag behind and aims to step up its performance too by spending money to deliver more live footage of the racing. Clever use of modern technology and good old-fashioned hard work by the men at the German RealTV Group will bring the very best grand prix yacht racing into your homes.

For those on the move, the Super Series app developed by Virtual Eye now also allows fans to follow the racing on their phones. The application is available from the Google Play store for Android users and for Apple users from iTunes. But these tools should come with a health warning as it is somewhat addictive to watch what is happening on the water in real time.

Nothing better, though, than to race yourself. I hope that what we present is not just good entertainment but also inspires you to give it a go or to step up the racing that you already do.

It is a great sport, get onboard (more) in 2017. And come and visit us when we are in your neighbourhood.
Rob Weiland, class manager