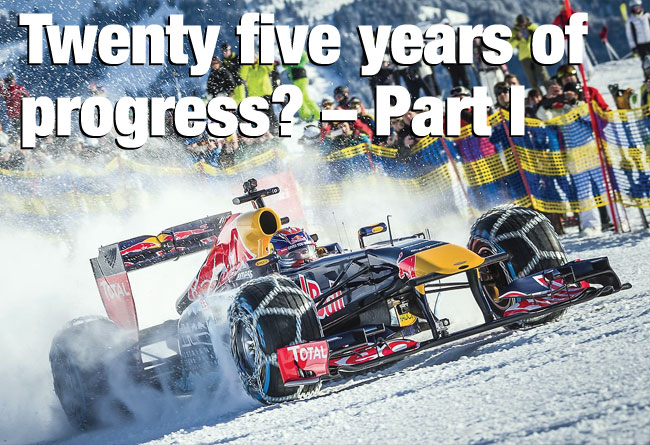 I work for the Red Bull Formula One team where everything evolves and progress should be made on a daily basis; it’s what we’re paid to do, to not stand still and be satisfied with the status quo but to constantly improve – at absolutely everything. However, progress can be measured in so many ways; pure outright ‘straightline’ speed, acceleration, efficiency, safety or attention to detail, quantity and quality of upfront R&D and engineering, the list goes on.

If I look back 17 years to 1999 and my first year in F1, the Stewart-Ford SF3 looks outwardly similar to the RB11 car that we raced in 2015, but with the passage of time you’d expect improved ‘performance’. However, reviewing the pole times for the Spanish GP suggests otherwise… 1999: 1:22.0 and the same in 2016. Regulations, power units, tyres, weather and, in the case of Barcelona, changes to the circuit layout all play a part in this apparent stagnation.

The point is that to the layman it might well be hard to understand why in 1999 an F1 team of around 200 people could produce a car of seemingly similar performance to a team of well over 500 in 2015.

A quick look back in history at the fastest race laps at circuits that haven’t changed too much over the years does reveal that on average F1 cars got around 9 seconds per lap quicker between 1995 and 2005, and have then become around 5 sec/lap slower between 2005 and 2015. Highly simplistic and lots of caveats (fuel load, tyres and so on) but interesting nonetheless. We’ll see whether we can claw back the lost 5 sec/lap in 2017…