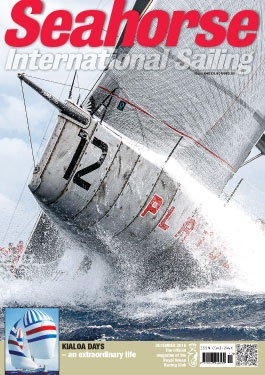 Forever young
It’s not easy to break into the grand prix circuit – and that’s bad for everyone. ROB WEILAND

Do they (still) make them like this?
PATRICE CARPENTIER looks back at the first Vendée Globe and an extraordinary rescue at sea

End of an era
The passing of JIM KILROY severs another link with a remarkable time for yacht racing. DOBBS DAVIS and BARRY PICKTHALL

Now that’s trickledown
RICHARD JENKINS has travelled from a quirky sailing project to a world land speed record and now on to Norton Sound in Alaska...

Pure energy...
Something that Slovenian Mini 6.50 veteran and boatbuilder ANDRAZ MIHELIN has in spades. He talks boatspeed with ØYVIND BORDAL

Relentless innovation
UBI Maior Italia not only come up with clever new stuff, they are also not shy of leaning on the best lessons from the past to do it

(Max) speed for all
Trickledown can require serious smarts – and investment – if it is to be relevant. The development of North 3Di Race took both

Update
Two-boat, one boat, it’s all about to kick off, Denmark’s strangest secret, big changes (for the better) in the Volvo and time to look behind you... JACK GRIFFIN, JOCHEN RIEKERS, JONNO TURNER and TERRY HUTCHINSON

World Sailing
And we have some new rules... JON NAPIER

Sailor of the Month
JB’s a winner (again) and we give you a chance to help remedy a bit of institutional oversight...