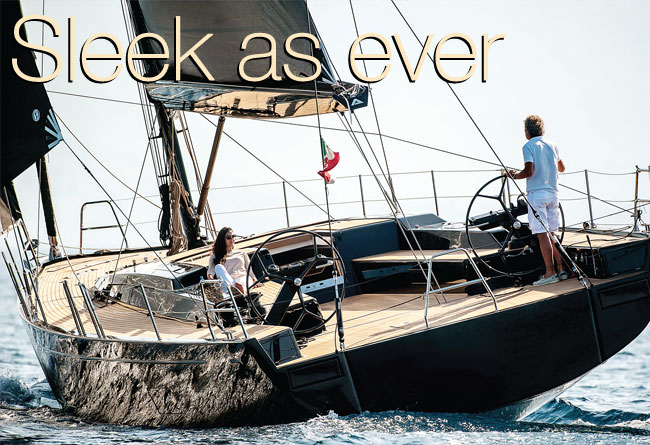 The collaboration between Felci Yacht Design and Cantiere del Pardo has a long history. It is now 15 years since Umberto Felci designed the GS70, the Italian yard’s custom flagship produced for a German customer. In 2002, in collaboration with Rolf Vrolijk, we also designed both the GS45 Cruiser and the successful GS44 Performance Cruiser, which kickstarted a string of similar designs that for many years dominated IMS racing, winning several European titles. After the GS45, in 2003 we designed the GS50, working with French designer Patrick Roseò.

Main picture: Clearly working very well together, Umberto Felci, Nauta Design and the Cantiere del Pardo shipyard have come up with a stylish new 58-footer that does a pretty passable impression of a much larger contemporary yacht… those famous words Wally-Style even spring to mind. Nobody is calling €860,000 cheap, but take a look at the cost of some similar sized rivals…

So after so many years we were pleased to return to work with Cantiere del Pardo, this time with another great studio, Nauta Design. Our task involved the naval architecture of the new Grand Soleil 58 Performance, a fast-cruiser designed and built to the highest production standards.

We tried to create an efficient hull that was able to accomplish the difficult task of sailing fast but that was also easy, safe, comfortable to handle and, last but not least, with generous internal volume.

When we approach a project for a so-called fast-cruiser yacht we have to first look at the compromises that will always be necessary in a multi-purpose boat of this type. This is a matter of sensitivity, balance and a good feel for the client’s objectives more than just a matter of numbers and science.

In the intervening years since we last worked with this yard we have designed several yachts of a similar concept from 45 to 80ft. I think we have sharpened our abilities in this sector but you must still remain flexible as each client has his own priorities. I like to imagine that the ‘race’ or ‘speed’ factors sit on one side of the equation and ‘cruising’ or ‘comfort’ factors on the other. In fact, the understanding of what a client really wants is sometimes the hardest part of the process.

If the race capabilities are central to a project, then more effort will be put into hull and appendage refinement. If an elegant, comfortable cruiser is the goal then other factors take on at least equal importance. But you also know that most customers want the same dream in every area; we are often asked to deliver maximum speed together with maximum comfort! And this was rather the case with the GS58... our brief was for the fastest and most stylish and most comfortable yacht of its type…

To define the hull shape we began with a study of our CFD database looking at the potential differences in performances between chined and rounded hulls, analysed by equalising the main hull parameters including volume, LCB position and especially equalising the righting moment at 20°.

Due to the small performance differences between the candidates analysed, the yard’s decision was to stay with a conventional round-bilge hull in the classic Grand Soleil style. That said, we had to accommodate a wide range of boat and keel weights due to the options that would be on offer. To allow this flexibility without hurting performance a traditional hull was made a bit narrower at the waterline and deeper in profile. The final hull has generous volumes providing plenty of space inside.

The balance between the width of the canoe body and its depth is fundamental to a project like this one. We needed the saloon floor to be high for good visibility and light and of generous area. But we also needed to control beam waterline in order not to overly increase resistance. I consider this ratio the real key factor with this kind of hull, so we undertook a specific analysis to identify the correlation between hull resistance and internal volume.

Three keel configurations are available: a shallow draft keel (2.45m), a deep draft keel (2.90m) and a ‘race keel’ with a draft of 3.15m, manufactured in highmodulus stainless steel with a CNC-machined bulb.
Umberto Felci, Garda 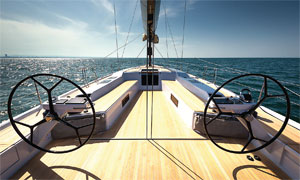 Above: bend your knees a little and it’s easy to convince yourself that you are at the helm of the latest dual purpose Mini Maxi… Go down below and the illusion might continue. The GS58 is a very long way from a typical production yacht of this size with the emphasis very much on creating a mid-sized ‘big boat’ rather than a smaller design that has been over-fertilised in order to cram in as many beds as possible. Most certainly ‘a looker…’ 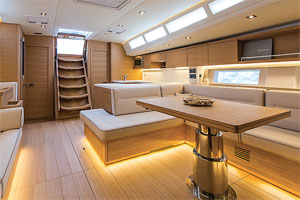 Sleek by nature
With the new Grand Soleil 58 Performance Cantiere del Pardo is trying to increase its grip on a sector of the market in which the Italian brand has been strong for decades: racing in style.

The first public display of the boat was a true grandezza, centrestage at the 2016 Cannes Yachting Festival on Quai Saint-Pierre, where, painted in the deepest, hottest and most lustrous black imaginable, she drew an impressive crowd.

Just a year ago the yard had broadened its range with the 46 LC (‘Long Cruise’), aimed at the comfy end of the mid-sized luxury market. She won European Yacht of the Year, boosting sales as well as confidence at Cantiere del Pardo – which had changed ownership and management a couple of times since 2010 but now seems to be back in calmer waters.

The Grand Soleil 58 Performance is intended to sharpen the brand’s profile in its core market of fast cruiser-racers. Before the first boat was completed four owners had paid their deposit; a further seven boats have been sold since with plenty more serious enquiries. As a result the yard is now restructuring its build process just to keep up with demand. ‘We were pretty stunned by the initial popularity of such a big boat,’ acknowledged general manager Fabio Planamente.

Cantiere del Pardo left nothing to chance. They put together a strong all-Italian team of designers. Along with Umbert Felci and Nauta Design they brought back Marco Lostuzzi, who had previously helped create the popular GS46 LC.

‘We have produced more than 200 boats of around 50ft in the past 20 years,’ says Planamente. ‘We have a big database and so we talked to many of our customers about their expectations of a modern performance cruiser.’

Not surprisingly, the feedback highlighted a somewhat contradictory wish for beauty, power and sailing performance… as well as generous cruising amenities. ‘Owners have grown older,’ says Planamente. ‘They still want to sail fast but they are no longer willing to give up their comforts… In fact, they want more of them.’

So when you step onboard the new GS58 you will certainly not feel as if you are on a raceboat. But don’t be mistaken – more than 80 per cent of the modern interior is veneered foam sandwich, the main bulkheads are composite and the structural hull grid is also predominantly carbon.

Deck layout is split into two parts. There is a guest section aft of the companionway, behind which is the control centre of the boat with winches plus a piano of stoppers. Aft again are two pedestals. The set-up keeps the companionway clear of all ropes and hardware, also maximising the clean visuals of this new yacht.

Grand Soleil offers the GS58 in a variety of flavours. The base boat is an all-rounder. But with a generous options list you can customise it to taste – from ORC or IRC-optimised racer with tall carbon rig and deeper keel to a full-on luxury toy with airconditioning, generator, dishwasher and multiple fridges…

We sailed a model a notch or two up from the standard boat in terms of power, but not with the maximum performance possible. It came with carbon rig and membrane sails, with a big Code 0. Sailing any luxury 58-footer at 8.5kt in 8-10kt of wind at 90° TWA is still something of a novelty to this sailor. With 11-12kt TWS you are quickly up to 9.5kt. If you are looking for a boat perfectly suited for Mediterranean conditions this may be it.

With the 58 Performance you do not just get Grand Soleil’s latest racer-cruiser, you also get a ticket to a GS58 circuit to be launched in 2017, hooking the class into five of the most iconic Mediterranean regattas including the Rolex Middle Sea Race.

My friends at Seahorse tell me that Cantiere del Pardo is already working on a scaled-down and souped-up 48ft version of the 58, due to launch in 2018. Who called the performance cruiser market down and out?