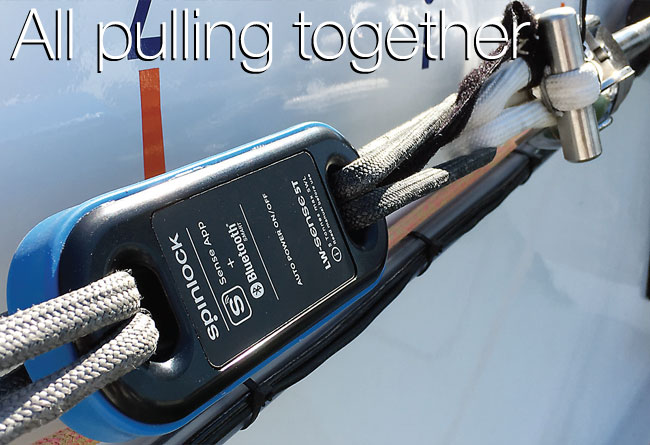 Load sensors and data gathering have been a familiar part of the sport going back to the late era of IOR – in particular the final generation of IOR supermaxis like Bill Koch’s data-muncher Matador3. Today the technology is prevalent from the America’s Cup to big offshore trimarans to VO65s and including most of the modern superyacht fleet. The demand for data from raceboats is continually increasing – but it’s a form of technology that to date has been relatively inaccessible to the mainstream sailor, not to mention many designers and builders.

However, for some time Spinlock has been working on developing load-sensing technology that is accessible to the wider world of sailing, as the company’s marketing manager James Hall explains: ‘Spinlock has been measuring load on ropes and rigging for 20 years, but recently more and more people in the sport have acquired an appetite for data and the performance benefits data can bring to a team if used correctly.’

The benefits are many and varied, including:

‘We’re finding it’s not just sailors who are interested in the data,’ says Hall, ‘it’s also boatbuilders and designers looking to validate actual loads against design predictions. The same is true for sparmakers while sail designers want to understand more about the loadings on their sails and modify their designs accordingly.’

A feature of Sense load cells is Bluetooth connectivity, allowing data capture to phones and tablets via the Spinlock app. According to Rán project manager Jan Klingmüller, this opened up their data to the whole sailing team. ‘With your iPhone in your pocket it’s picking up data all the time, giving you backstay tension and mainsheet loads etc.’ Klingmüller admits he finds it all a bit addictive. ‘The more you use it the more ways you find of using it. We now use it to weigh our motorbikes…’ 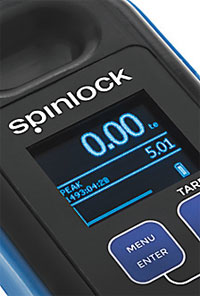 Spinlock offers two ranges of Sense products – Digital and Wireless – with several models working through the tonnage spectrum: 5, 10, 20, 30 and 50T. The units are simple to attach into a system using soft loops, so can be moved around the boat and installed or removed in seconds.

‘America’s Cup world has always been good at data capture,’ says Hall, ‘but less so the Mini Maxi fleet or the TP52s. But we’re seeing that changing quickly now, as teams realise this kind of data capture offers the incremental gains that can make a massive difference in a tightly contested fleet.’

The Sense tools have also proved important to the rapid development of the M32 catamaran on the World Match Racing Tour. ‘The builders of the M32 used Sense load cells to validate loads during development and then better tailor their deck equipment to the live loads encountered.’

If there’s one part of the sailing world that needs no persuading of the importance of measuring and limiting load, it’s the superyacht race circuit. With owners commissioning yachts for cruising but then catching the racing bug, it’s easy for design loads to be exceeded. This makes it vital to know how highly you can load up sheets and running backstays, for example, before fittings start to rip out of the deck with potentially catastrophic consequences.

‘With larger yachts and superyachts in particular,’ says Hall, ‘insurance liability is becoming ever more onerous. If a rigger has made a soft loop for attaching a block, they need to prove it is properly tested and that the recognised certificate has been issued. More and more we are seeing riggers turn to load sensors to validate their work.’

According to Andrew Martin, product development manager at Oyster Yachts, Spinlock’s Sense products have become integral to the testing process at Oyster. ‘We use Spinlock products for weighing spars, for running winch load tests and for halyard and sheet load tests to build up empirical data.’

Alex Thomson’s Hugo Boss team have been using Spinlock equipment for load testing their Imoca 60 leading up to the Vendée Globe. ‘In a development class like the Imoca 60, everything needs to be as light as possible while being strong enough to do the job all the way around the world – so using the Sense load cells has been a vital part of the testing process for Hugo Boss,’ says Hall.

Comanche is another state-ofthe- art campaign that tests the edges. Every element of this super powerful 100-footer has been designed around achieving the perfect compromise between weight and strength. Project manager Tim Hackett says: ‘We used a 5T Spinlock load cell for Puma in the Volvo, which we used for checking sheet loading, load testing at the dock and so forth. On Comanche our maximum sheet load is around 9 tons – we’ve used the Spinlock gear for testing winch pods, leads to the primary winch pods and setting up configurations.

‘It’s an easy tool to set up, so sometimes we’ll have the load pins in the winches and runners during a big manoeuvre, using it as a check-in to make sure the boat’s permanent gauges are giving us the correct information…’