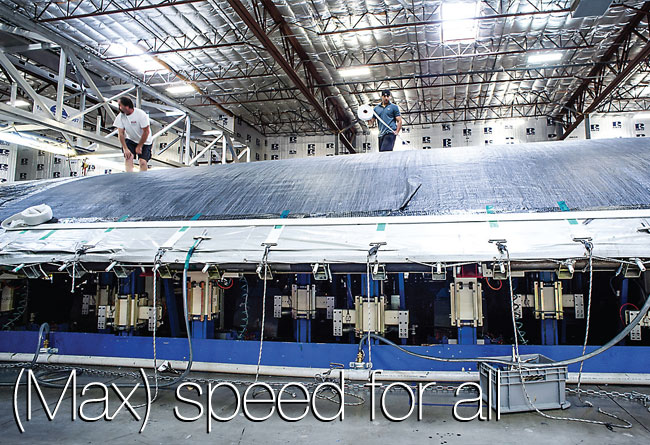 3Di Race
Following its success with 3Di across the grand prix, offshore and superyacht fleets globally, North Sails have launched a new variant tailored specifically for the club racing market.

Main picture: Like a prop on the set of the latest Stephen Spielberg space epic, the giant computer controlled articulating – ‘wavy’– moulds upon which all North 3DL and 3Di sails are now pre-shaped and cured. This can make for absorbing viewing as the software dictates a change of profile prior to a new sail being laid down. Sails up to J-Class size and beyond can now take advantage of this process, as can the potentially much wider audience for North’s latest 3Di Race product

Originally born of development work carried out for Alinghi’s successful defence of the America’s Cup in 2007, in name 3Di may sound like 3DL but is an entirely different technology. 3DL is a lattice of load path fibres laminated between two layers of Mylar (aka ‘string’ sails). 3Di is a composite sail structure, closer in technology terms to carbon boatbuilding, involving the moulding of multiple featherweight ‘tapes’ of spread fibre filaments (from carbon, aramid or Dyneema) preimpregnated with adhesive.

The layout of the 3Di tapes in a multiplicity of orientations and layers enables a sail to be engineered with ultra-high precision, but without the weight of the films required for a string sail. The only similarity between 3DL and 3Di is that both achieve their shape through being manufactured on North’s proprietary articulating, three-dimensional moulds, where sails are built with their flying shapes moulded in. The end result is 3Di being capable of creating super-light sails with maximum shape retention, displaying previously unheard of shape stability over a wide wind range.

3Di Race is a relatively new derivative aimed at boats under 40ft and with a luff length of less than 16m. Bill Pearson, technical director of North Materials, explains: ‘With 3Di Race we’re targeting people who haven’t bought a 3Di sail before, probably first and foremost because people feel it’s too expensive or because they don’t think they need it, maybe because previously it’s been seen as purely a grand prix race product.’

Compared to the grand prix product 3Di Raw, 3Di Race is made in exactly the same way, but the structural engineering and resultant build of each sail are carried out in a manner tailored to smaller raceboats. ‘You might call this bottom-up design, rather than trickle-down’, says Pearson. Often new sail products tend to start out targeted at highly loaded raceboats, where a constant demand for innovation is matched to a willingness to take risks. Hence when the technology trickles down to smaller boats, the sails tend to be over-engineered for the application, since smaller boats experience proportionally less load.

3Di Race emphasises equal sharing of the loads throughout the sail rather than using intense fibre concentrations to carry the higher loads seen on the biggest race yachts. As a result these new 3Di Race sails will typically be lighter, more flexible and softer to handle than the stiffer high-end 3Di products that the sailing community is now used to seeing.

Pearson provides an example: ‘So, for instance, on a grand prix raceboat there’s a heavy concentration of fibre up the leech and out of the corners, because that’s where the highest loads are, which also makes a sail stiff and expensive. On smaller boats, or racer-cruisers, the sails won’t be sheeted as hard, so less fibre and membrane stiffness is required for the lower loads. It’s exactly the same for dinghy sails, where a more compliant sail makes the luff more responsive to subtle pressure, angle and trim changes.’

For reasons of longevity, 3Di Race is built using aramid and Dyneema rather than carbon, for maximum durability, although longevity is inherent to the 3Di sail structure. ‘Since 3Di technology doesn’t involve fibres being laminated to a film, the sails enjoy a longer ultimate life because they don’t delaminate and there’s no film to puncture or crack.

‘So, like the 3Di sails that went around the world on the VO65s, which used the same durable fibre combination as 3Di Race, they’re going to stay in one piece for as long as a crew want to use them. There’s nothing besides a heavy, bulletproof Dacron cruising sail that will last as long.’ As with all 3Di styles, 3Di Race sails will maintain their shape over a longer period and through a wider wind range than sails of a similar design built using a lesser technology.

This can mean fewer sail changes and fewer sails in the inventory – as has been requested for the latest Volvo Ocean Race sail wardrobe which are 100% 3Di. ‘So now you have sails that are going to last longer than string sails plus a club racer might need one fewer headsail in their inventory,’ adds Pearson. ‘Not a bad proposition.’