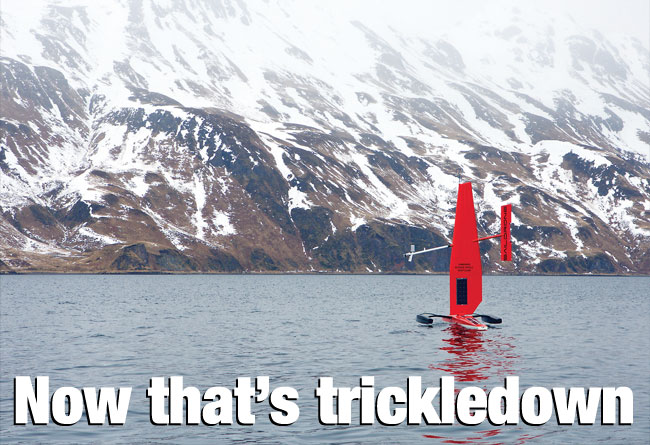 Only rarely is a radical technology used to break a major world record then developed for mainstream or even commercial use. Think round-the-world flight, land speed record, even the remarkable Vestas Sailrocket. But when Richard Jenkins smashed the world speed record using windpower he was already thinking about a much bigger picture

Back in 2012, when I proposed the Saildrone concept to a panel of ocean scientists, their reply was ‘if you can do it, it is a game-changer, but it’s impossible’. That was, of course, the ultimate incentive to prove otherwise. After the successful crossing of our early prototype from San Francisco to Hawaii in 2013, 2,200nm in 32 days, the same panel conceded that it ‘may be possible to cross an ocean, but you’ll never measure anything useful for ocean science, you can’t take precise measurements from a moving platform’.

Once again I had been handed the incentive and so I reached out to some of the world’s best oceanographic institutes to ask them what they wanted to measure, and how we should go about it.

While everyone had somewhat over - lapping requests, they all pointed to the Pacific Marine Environmental Laboratory (PMEL, the engineers behind NOAA’s ocean and atmospheric measurements) as the ‘gold standard’ for ocean data.