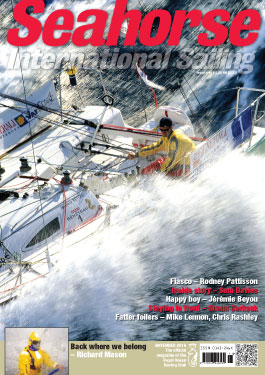 ‘I stick with it until I win’
JEREMIE BEYOU is one of only a tiny group of three-time Figaro Solitaire winners, yet he has had less good fortune in his previous two Vendée Globe attempts. But this time it will be different!

Deep background
Among the offshore singlehanded community the Pole Finistère Course au Large in Port La Forêt – or POL – is the stuff of legend. Squad member SAM DAVIES lifts the curtain (a little)

It was about the racing
In motorsport the saying goes, ‘When the flag drops the bulls**t stops.’ Once the racing in Rio got underway, few could remember what they had been complaining about. ANDY RICE

Not simple
(Very) fast and (very) comfy please. So arrived the brief for Reichel/Pugh’s latest Superyacht. DAVID OLIVER explains how he got his first grey hairs

Back to its roots
After (way) too long bouncing off the Equator the Volvo Ocean Race is heading back down south. RICHARD MASON talks to BLUE ROBINSON

Don’t assume
Moths in the Olympics? Ironically the pocket foiler may soon offer the big boys their only real alternative to muscling up for a Finn… CHRIS RASHLEY, MIKE LENNON and ANDY RICE

Where champions are made
Exactly 681 young, fast and hungry Laser sailors descended upon Kiel’s Schilksee Harbour for their Youth Worlds – and once again Kiel’s regatta managers just took it all in their stride

World news
Go south if you want to, learning to the very last, putting the sofa behind you, Rio sacrifices and shaking up the US of A. BORA GULARI, IVOR WILKINS, BLUE ROBINSON, PATRICE CARPENTIER, DOBBS DAVIS, JACQUES CARAES, MAT BELCHER

IRC column – Simple is good
And weighing a Maxi is not hard. JAMES DADD

Seahorse build table – Sailors, who needs ’em?
With another US$14million just added to his war chest, RICHARD JENKINS is enjoying watching his growing fleet get extremely cold on his behalf