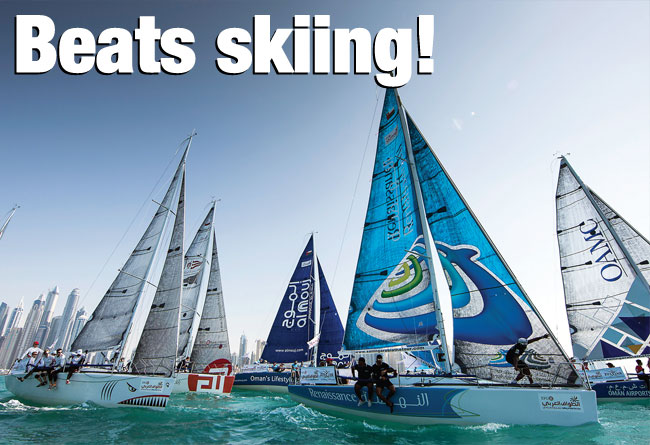 Look out, Florida – and Courchevel – Imoca 60 and MOD 70 trimaran racer Sidney Gavignet is a big fan of a competitive winter alternative…

5 LEGS – 763 MILES – ONE DESIGN – ARRIVE-AND-DRIVE – ARABIA’S NO1 OFFSHORE RACE
It is not hard to work out why I love racing EFG Sailing Arabia – The Tour (SATT)... aside from winning three of the last four editions with our Farr 30 EFG Bank Monaco! The weather is warm, the racing is competitive and challenging and the event is rich in both culture and fun.

In February in Europe there is not much to do except ski, and this is exactly what we did last year, but in Dubai… In fact, I think our team building session at Dubai’s indoor ski resort before the start of the 2016 edition formed the building blocks of our subsequent success. The pleasure and challenge of putting together a team each year to compete successfully over 10 days of intense one-design racing are one of many reasons why I keep coming back to this race.

Main picture: we’ve said it before in these pages, but even 20 years on the former Mumm 30 remains one of the best all-round packages in small, fast one-designs. Rewarding to sail well, and with offshore capability proved in the Tour Voile, combine a Farr 30 with good breeze and warm Gulf waters and you have an alluring opportunity…

To meet the SATT challenge you need a certain type of sailor and for me Fabien Delahaye, who has been a vital crewmember for EFG Bank Monaco, is exactly that type. Fabien is an excellent Figaro sailor and has the perfect profile for SATT where you need endurance, aggression and enough stamina to stay with the pace of racing a small and fast offshore one-design for 24 hours a day.

As a young sailor, this is what I learned on the Tour de France à la Voile. But with the Tour Voile now a day racing event, Sailing Arabia – The Tour is probably the only sailing event in the world to combine top level one-design racing with a bit of adventure in new waters, plus the simplest possible ‘Arrive-and-Drive’ solution for competitors.

Some of the world’s most experienced sailors compete in SATT alongside some incredible amateur talents. Volvo Ocean Race veteran Neal McDonald joined our programme for SATT 2013 and together we enjoyed a true voyage of discovery! Dee Caffari has done a few SATTs leading an all-female crew, Groupama Volvo 70 watch leader Damian Foxall has also raced the event, as has Bertrand Pacé (who also won it a couple of times) and Katie Pettibone among many other well-known names.

It is a blast to cut through giant rocks in the north corner of the Sultanate of Oman and to pass through the Straits of Hormuz with the spinnaker up, gybing at the base of the cliffs to avoid the stronger current. We have other amazing memories including sailing into Dubai for the first time and seeing the incredible Burj Khalifa skyscraper rise up before us.

This year we played golf under the tower and went skiing before venturing out on the water for the first in a series of very tight races. There was a lot to learn and deal with, not least the local winds and currents, the fishing nets and the flotillas of fast-moving but immovable tug boats and barges…

In Muscat the teams can train for up to 5 days before the start to set their rigs, prepare their Farr 30s, calibrate their electronics and familiarise themselves as they get everyone fully race ready. An in-port race in Muscat kicks off the proceedings on 14 February before offshore leg 1 that starts later the same day.

Leg 1 from Muscat to Sohar, also in Oman, will be the first test of the sailors – and especially of their ability to extract good average speeds out of what remain very tweakable little boats. This is a one-night leg that takes a critical corner through the Daymaniyat Islands, famous for diving. We have done it twice so far, upwind and downwind, but most of the time it has been a light-air leg where you play the sea breeze and land breeze in turn.

This may only be the first leg but the race is on so points are at stake. In Sohar the welcome is spectacular; the International Maritime College lays on a colourful presentation of Omani culture and traditions – this is a race party like no other in the world.

Leg 2 from Sohar to Khasab is the leg you don’t want to miss. It’s like the Alpe d’Huez if you are a cyclist! The first postcard opportunity comes shortly after leaving Sohar as the fleet crosses through a ship anchoring zone then passes along the spectacular coast with its steep, shear-faced mountains that drop straight into the sea. It is a breathtaking and unforgettable sight when viewed from a raceboat at sea. 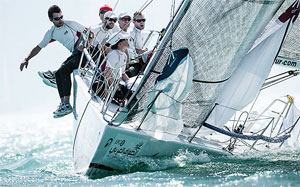 The SATT offers one heck of a way to explore the Gulf when northern Europe is still shivering. The unique draw of the SATT is that it is now the only such event in the world where you really do get to just rock up and race… on a proper racing boat. No logistics, no shipping or spares to think about, just choose your crew and print your T-shirts

The following morning can be full of surprises: did heading offshore pay or did those who played the coast make the gains? The cherry on the cake is rounding Musandam, the Omani peninsula on the Hormuz Straits and one of the most beautiful sights on the coastline, then on to Khasab and the end of leg 2…

Leg 3 from Khasab to Abu Dhabi is probably the trickiest, with a few forbidden areas to avoid and some difficult strategic decisions to make. The current is quite strong on the first part of the leg, making anything possible – in spite of February’s normal prevailing and steady easterly gradient. And for those who don’t know the area, Abu Dhabi and Dubai are impressive cities and it has been a privilege to discover them from the sea.

Leg 4 to Doha and now the navigators have to really be at the top of their game. We sail through petrol fields which make for an amazing atmosphere at night, watching the flames light up the sky. Be prepared for a fast-paced opening, with tight boat-to-boat racing, followed by the approach to Qatar peninsula which demands a swift change of gear as the breeze often peters out. Day 2 is crucial because everyone is tired at the point when a clear mind becomes essential… This is when good crew rotation really pays off!

Doha hosts the second in-port race of the event and has a great stadium racecourse with flat water and shifty winds. By the time we arrive all the teams will be manoeuvring well and ready for a great battle over up to six tight sprint races.

In Doha you will also see Gilles Chiorri, the SATT Race Director who also manages the Figaro Race, the Route du Rhum and The Transat, working closely with the Omani race committee to make sure that the fleet puts on a great show for local VIPs who include royalty, government officials and well-known CEOs plus their guests… together with a strong media presence.

The sting in the tail in the SATT often arrives at this point, when the teams are all fired up and fighting for a big enough points haul to dramatically influence the overall result. But fear not – the international jury will be watching!

Leg 5 from Doha to Dubai is a proper offshore leg – downwind we hope – where the Farr 30 navigators will once again have their work cut out before the teams battle it out for points in the Tour’s concluding In-Port race in Dubai.

Those already planning to escape the cold European winter for some warm water racing should give EFG Sailing Arabia –The Tour serious thought. After six editions this event is now well established and growing; in particular the race package offers the easiest ‘turn up and race’ offer that you will find anywhere on the planet. The racing is good and tight, the Farr 30 remains one of the most rewarding small offshore one-designs – that you will also be racing past some of the most spectacular coastlines you can find anywhere is just a bonus.

As for us onboard EFG Bank Monaco, three wins are a good record but we fight on!
Sidney Gavignet, La Trinité