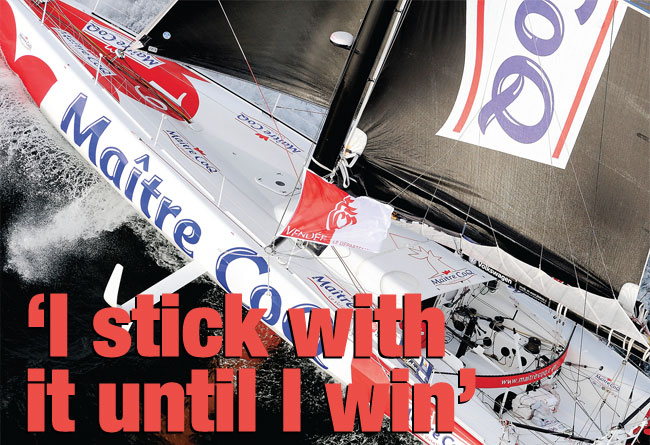 The world of high-tech, big-budget ocean racing (even though the Imoca class officials would probably beg to differ on that monetary point) can be punishing, and many skippers out there have seen years of careful planning and efforts wiped away in an instant, often at the worst moment possible. Jérémie Beyou, who is about to line up for his third Vendée Globe start, is certainly one of them: having suffered from mast issues and then keel damage in the two previous editions of the solo round-theworld race, the 40-year-old has had to learn the tricky art of bouncing back, while soldiering on and keeping his name high on the leaderboard at other high-profile events.

And this spring, after a bold move that involved retrofitting his VPLP-Verdierdesigned Imoca 60 Maître Coq (ex-Foncia, ex-Banque Populaire) with foils, he finally struck gold – winning the New York to Vendée Transat, putting an end to a string of frustrating Imoca 60 moments.

Jérémie’s adventures in the senior offshore class started 10 years ago, when the Breton skipper took the plunge with Delta Dore, fresh from his very first Solitaire du Figaro win. Back then Farr-designed Open 60s were all the rage, and Jérémie’s new toy was built in Cherbourg by JMV. The keen-to-learn, aspiring planetary soloist, meanwhile, hopped aboard a variety of other boats over the subsequent months, to observe and sharpen his skills with the best: Vincent Riou, Michel Desjoyeaux and Jean-Pierre Dick, with whom he won the 2011 Jacques Vabre on Virbac.