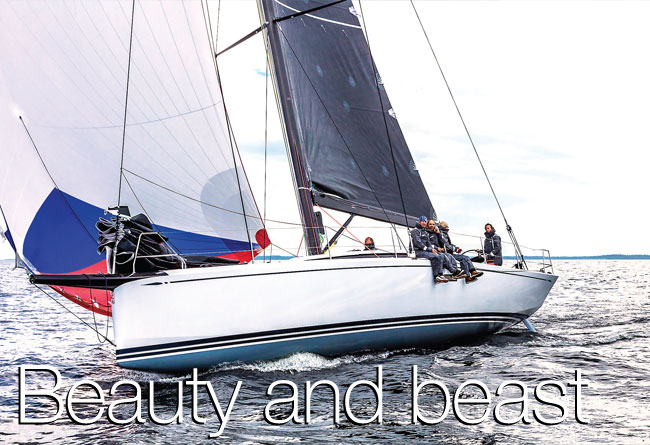 Sleek, powerful, radically new… With her teak decks and seductive interior, you just wonder what she is all about – until sails are set and she whisks away, in the lightest of puffs. At sea with Nautor’s ClubSwan 50

July in Finland is off-season. Companies closed, families gone to their summer houses. So it is a somewhat eerie sight to come to Nautor, this hallmark of a boatbuilder, with a brand new yacht moored in front of the Pietarsaari plant, workers everywhere when in fact there should be no one and nothing around.

Normally the Finnish adhere to national holidays like they were a religious thing. They care to spend time with their relatives and friends. Normally at Nautor they assemble boats inside, not on the dock. And normally, if and when they do invite you to a sea trial they will have checked and fixed every little detail to a degree rarely seen.

This year, however, is anything but. It marks their 50th anniversary – a date few serial production yards have passed. Nautor did not just weather this past half-century. They moulded it, earning a near-mythical reputation early on when pioneering GRP boatbuilding. Unforgotten Ramon Carlin’s win in the first Whitbread Round the World Race 1973/74 on his Swan 65 Sayula.

Now at 50 and matured in many ways, Nautor are not going to sit still. Quite the contrary. With the ClubSwan 50 they present a yacht pivotal to their near future. ‘It’s not just a new model,’ says marketing director Vanni Galgani. ‘It’s a statement.’

The smallest boat of the range, she is also the technologically most advanced, built and cured in pre-preg carbon epoxy. At 8.5 tons – 3.45 of which are attributed to her keel ballast – no other serial production yacht her length comes lighter, none carries more sail area. On the yard’s commissioning dock the sound of small, choppy waves nudging her stern is indicative of both her strength and nimbleness – it resembles that of a Laser or a 505, so thin the layers of carbon cloth, so light the panel just above the water.

She is carbon everywhere: rudder stock and blades with tubercled trailing edges like on Rambler 88 are, of course, carbon. The 3m keel fin: pure high-modulus carbon. Even the hinged backrests of her salon sofas, doubling as sea-berths, are made of carbon – as are the teak veneered floorboards, the dining table, the masterfully infused mast support, the base of the berths. Just the frames of the hatches break with this regime. As a visual quote of Nautor’s past they are artfully built from solid teak.

Swan no1 Tarantella (below) keeps the new ClubSwan 50 honest as the latest product from Nautor goes sailing for the first time. The original Swan 36 is now a design icon but it also remains a formidable performer on handicap on windy windward- leeward courses. A keel gallery allows a displacement range of 250kg for the ClubSwan 50, to help it also slot into both of today’s principal offshore rating systems 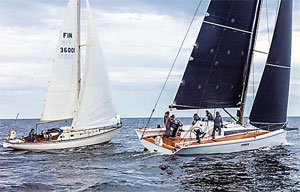 Why this? Well, because the ClubSwan 50 is still supposed to be a Swan. She may be a one-design racer-cruiser, she may be competitive in ORC or IRC according to her set-up. But never ever would Nautor’s main shareholder Leonardo Ferragamo conceive a pure racer. Hence her vast decks covered in teak (3mm thin, though, mind you!). Hence her so artfully designed and decorated cabin. In fact, if seasoned sailors went down below blindfolded and had to tell just what kind of boat this is few would ever imagine her to be a thoroughbred.

In Pietarsaari, side by side with the 50, lies her role model, her ancestor: Tarantella. Build number 1, model 1. The first and only one in 1966 when the legacy began. This legendary Sparkman & Stephens-designed Swan 36 started it all. A slender, narrow hull with timeless lines, a cockpit so tiny you wonder how she could ever accommodate more than a couple. Her benign stature makes her a true GRP classic, just like so many older S&S Swans which are quickly off the market when for sale.

This summer Tarantella was to be the brand’s ambassador in the Jubilee Regatta off Turku (Finland) and at the Rolex Swan Cup in Porto Cervo. Nautor bought her back more than 10 years ago and refitted her sensibly – deliberately not transforming her into a beauty case of a classic but leaving much of the original and some scars of half a century at sea. Maybe this is why today it seems so unlikely that back then, in her early years, she was hugely successful on the racecourses. Or is it just the stark comparison to the ClubSwan 50 that renders any similarity, any common traits unreal?

Tarantella’s latest successor, the Juan Kouyoumdjian-designed 50, is almost twice her waterline length (14m to 7.77m) and more than twice her power in terms of sail area to displacement ratio. Both of them represent the most advanced state of technology of their times which is in fact the only link between them – apart from the pointed arrow below the gunwale that became Nautor’s trademark.

There are memorable pictures of these two icons together. One shows both of them launched during the company festivities in June, the other was shot two days before our sea trials. Nautor then took the 50 for a first outing while Tarantella sailed close by to windward. It was rainy, with little wind, usually not the stuff for wide, beamy twin-rudder boats. And yet Juan K’s carbon weapon effortlessly feathers away close-hauled at easily twice the speed.

So how does she do it? How does she feel? Is she worth her 935,000 euros ex-VAT ex-sails, a rather reasonable price in fact considering her stable?

To find out we spent three days at the yard, waiting for pressure – and for the workers to transform what looked like a construction site into a boat. When all tool cases were off, on the first day big sail bags with the latest North 3Di cloth came on. It was 4pm by then but sunset is at 11 here and sometimes you have better breeze in the evening. So no worries!

Finland in summer is either – or. It can be tricky and variable and outright nasty within a few minutes. Or you get this Scandinavian high pressure that outshines anything. Unfortunately, we got some of the latter, three days of it, including the light winds typically associated with that: 10-12kt northeasterlies, slowly fading to 6. So as if to spare Nautor the first real test. While this no doubt is much less exciting than some proper breeze and waves to play with, it actually is a much harder environment to shine in. Yet shine the ClubSwan 50 did, indeed. Once main and jib were on the locks, cunningham and sheets trimmed, running backstay on, she hardened up immediately. The massive sailplan makes her easily lean on her chine, reducing wetted surface and finding a nice groove. 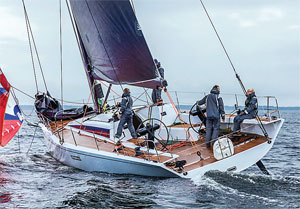 Above: the roomy, open cockpit and raceboat treatment of the aft side decks and open transom make for a very racy looking racer-cruiser. Winches are kept well out of the way for cruising comfort; note the primaries mounted where you’d normally expect pit winches. Meanwhile, go below on what is evidently a performance yacht and you will find this (below) fresh and modern interior with enough open space for both practical sail handling as well as post-race conviviality…

These were very early days in her development so speeds and angles are preliminary. But even so the performance is quite promising. At a bit over 80° tacking angle she clocked 7.7-8kt upwind in a mere 10kt of breeze. Though she does point higher, VMG will decrease quite quickly. It’s a trade-off that favours speed over angle.

While reacting instantly to the rudder the huge main and the aft-swept Southern Spars carbon mast induce a tendency to luffing up which could not be fully trimmed away. So the feeling on the helm was of a big and rather manly boat – somewhat surprising given the light construction. No doubt rig tuning will have a great effect on overall performance.

When easing the sheets and bearing away the ClubSwan 50 shows her true potential. She instantly converts to semi-planing mode at 90° TWA under main and jib only, almost matching wind speed at 9.4-9.8kt. With the big A3 up she just keeps building apparent wind, topping out at 12.5kt boat speed in 10-12kt true while behaving totally controlled, following every slightest turn on the wheel. You can pinch her quite a bit without losing grip on the rudder – a reassuring sign that she will do just as fine in 20kt of breeze and above.

Cockpit layout as well as hardware worked reassuringly well. However, you have to get used to operating the primary winches from the bench or the side deck as they are positioned too high up on the coachroof to be easily accessible from the companionway where in heavy seas crew would be safer. A main sheet jammer on both sides would allow crew to free the main winches if need be. And the purchase for the traveller, neatly tucked away under the deck, takes quite a hand to operate even in the light airs off Pietarsaari.

So if you plan on joining the club of owners prepare your crew for some power workout and a few expertly drafted battle cards. Since the ClubSwan 50 is conceived first and foremost as a one-design class with no lesser than Jochen Schümann as president, expert handling will be positively beneficial as the class is fast growing.

Without anybody having sailed yet, already eight boats had been sold when Nautor lifted the curtain in Turku for the first time. It’s a number that will rise quickly once owners get a hand on the wheel in coming months. Not least because of the beauty side of this beast: her stylish amenities down below. Though very different from the successful Swan 45 that debuted 15 years ago you can still go cruising comfortably with the 50 – and leave almost any other monohull far astern.