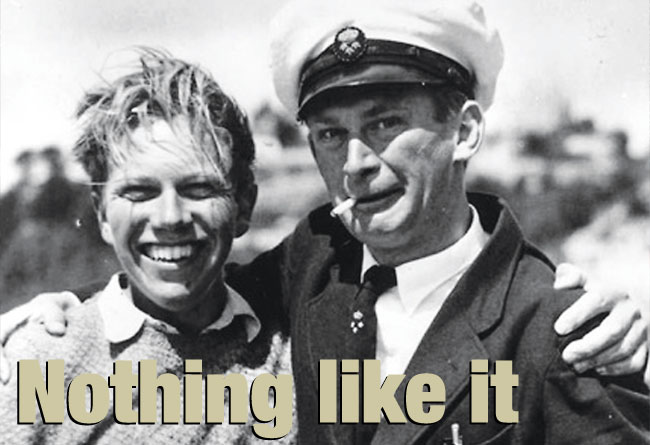 After four years of following the athletes and events that paved the road to the 2016 Olympic Games, I came to Rio de Janeiro to witness dreams realised and aspirations shattered. I had never been to the Olympics before, but what with the hurricane of headlines that preceded the 31st Olympiad, what the heck, right?

Main picture: Where legends are born… The father of modern sailboat racing, Paul Elvstrøm is congratulated by fellow Dane Eyvin Schiottz after winning his first gold medal in Torbay in 1948 in the Firefly class. Three more gold medals in the Finn and innumerable world titles would follow. And lifelong godlike status

My home town has hosted the championship Super Bowl game of the National Football League and the All-Star Game of Major League Baseball. The America’s Cup has been in my town. There are prominent conventions and cultural occasions that occur regularly. You always know when these happen. Banners line the streets. Buses are wrapped with promotion. But in Rio there was nada. I heard the supplier failed to deliver. Add it to the list.

It was hard to know the Olympics were going on unless you knew the Olympics were going on. It was my first time to Rio and, while I didn’t venture too far from a direct line between the sailing venue and my hotel, near Flamengo Beach, lest not to become headline fodder myself, there seemed to be marketing opportunities missed. However, the ticketed spectator area for sailing generally had a crowd, but what would you expect? Isn’t being on a beach what you do in Rio?

I was enlisted by World Sailing to help share the story of the Games, which soon revealed itself as the ultimate pop-up event. We were counseled how every day we’d face 100 problems to solve, and must accept that 100 more would return the next day. Don’t forget about rest was the advice. We did, trying to outrun weariness during this two-week marathon.

Compared to most, our sport is fairly simple to host. No stadium to build; only wind and water needed. Rio had both, located adjacent to the city. This, for a Games, happens infrequently. Sailing had the ultimate proximity. OK, beach volleyball on Copacabana Beach might have been better. Hard to beat long athletes who look lean in bathing suits. I consider the board sailors as the beach volleyball players of sailing. We can’t lose them from the Games, and it makes for a strong argument to add a kite event too. They are beautiful people too.

Guanabara Bay lived up to its billing as an epic venue. Double gold medallist Malcolm Page put it up there with his beloved Sydney Harbour, easily rating the Rio venue as top five in the world, maybe top three. ‘Each area of Guanabara Bay is so different, and so different day to day with that incredible surrounding backdrop.’

What the bay did not live up to was the rumoured apocalypse… Dangerous sewage and debris did not consume the competitors. People safeguarded against the former, and the latter in the end had no influence on the regatta. Yes, the keepers of the bay need to do better, but the playing field worked.

The significance of the Games is best witnessed by its effect on the sailors. It can consume people whole. I saw successful competitors who were casually calm and approachable, and others who were straining to keep it together.

The infrequency of the Games doesn’t help. Screw it up and it’s a long wait for another chance, one that may not come as younger and hungrier athletes threaten your position. There is a long history of sailors making strategic changes in the build-up, deviating from what got them there, only to see these changes be the cause of their demise. A lot of favourites fail at the Olympic Games.

Patience is a premium asset at the Games. Some events start days after others. All events have two reserve days built into the schedule. It was winter in Rio, so the race days were short. With fast coach-boat tows, time on land was long. Staying relaxed set people apart. The pressure can melt people, has melted people. Some are built for the Olympics, while other max out at the world championship level. Some DNA is just better than others. Next!

The planning for the Olympics is robust, with many decisions surrounding the broadcast. Sounds bad, tastes OK. We all like our sport on television, and Olympic Broadcasting Services (OBS) is the agency founded by the International Olympic Committee (IOC) to deliver footage to the rights-holding broadcasters. OBS is a cost to the Games, and the IOC did not open its wallet fully wide for sailing.

The Rio Olympics had racing in the bay and outside on the ocean, but the production cost didn’t include all the relay points to deliver footage from great distance. So no open water footage of spreader-high waves and mad planing. So much for fully highlighting the thrill of our sport.

The medal ceremony is the ultimate crescendo, and Rio knows how to party. This place has spirit. Awards on the beach with someone moving Sugarloaf Mountain into the background. Scheduled late afternoon for lighting (thanks, OBS), a spinning world for the athlete suddenly stopped. Every waking moment, every step taken with purpose, now got lost in achievement.

Yes, the Olympic Games are special, and the highest peak in our sport. We are lucky to have a mountain so high for the best to climb.
Craig Leweck