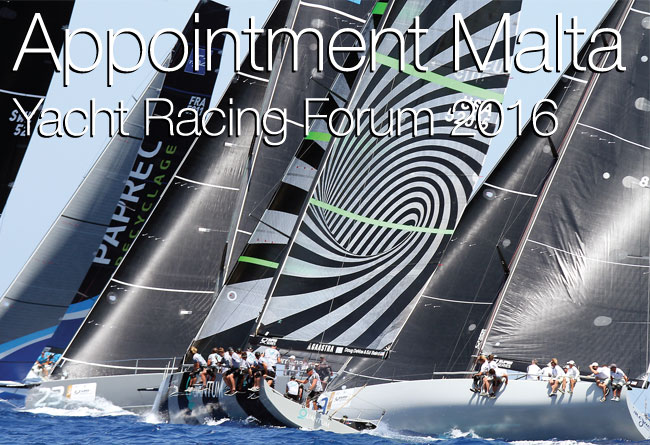 We look forward to the Yacht Racing Forum in November 2016

The premier conference for the global yacht racing industry will take place in Malta on 28-29 November. The only major business-to-business conference to bring together the sport’s key players, the Forum encourages business development through quality networking opportunities with decision makers from all sectors of the industry. This annual two-day event draws together sailing’s key personalities and experts to discuss the business of the sport as well as the critical wider issues of sponsorship, television, media, sustainability, new markets and event hosting by venues.

At the top of today’s owner-funded grand prix scene are the TP52s (above) and a gently growing fleet of Maxi 72s. A little further down the food chain is the Fast40+ fleet which will see some 15 boats on the startline at the One Ton Cup this month. But how do we persuade competitive Corinthian owners back into events like the Volvo Ocean Race? A good topic for debate in Malta this November… 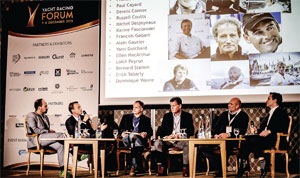 Above: For each conference module the usual healthy, informed opening statements and brief exchanges from the stage will this year be followed by more time for the audience Q&A than has been the case previously – one of many refinements for the ninth edition of the Yacht Racing Forum

Many of the most active brands and stakeholders have already confirmed their participation in the ninth edition of this increasingly popular gathering of the great and the good. It’s not an exaggeration that the Forum has evolved steadily into a must-do event for organisers, sponsors, sailing teams, technical providers, venues, yacht clubs and agencies involved in the yacht racing industry at all levels and in all its many and varied guises. And for those who can arrive a few days early, this year’s Forum has the added attraction of being preceded by the 2016 RC44 Valetta Cup.

The 2016 conference is split into four modules
1. Chaired by America’s Cup commentator Tucker Thompson (USA), the opening conference will focus on marketing and media, with individual debates and separate presentations around social media, television and sponsorship. This module will also include well-informed updates on event and boat branding and design.
2. The second module, on Monday afternoon, will be chaired by Richard Moore (GBR), the founding director of ESA, the European Sponsorship Association and currently CEO of the Alter Group, who will lead a discussion on event management, with a focus on the event management challenges common to many different sports as well as related issues such as sustainability and its perception.
3. The morning of day two is dedicated to risk management and safety. Sailing has changed dramatically over the past five years, with the arrival of faster foiling boats being accompanied by ever-closer action out on the water. Chaired by outgoing Volvo Ocean Race CEO Tom Touber (NED), this seminar will challenge the sport and its participants about awareness of such dramatic change. Are class managers, event organisers and clubs ready to adapt? Where does the sport’s governing body sit and in which aspects will it commit to taking the lead? And perhaps the key area going forward… emerging legal considerations.
4. Chaired by Seahorse editor Andrew Hurst (GBR), the final module on Tuesday afternoon will focus widely on both the top of the sport and the future of yacht racing more generally. At one end of the spectrum this seminar will encompass the resurgence in match racing, the Volvo Ocean Race and the America’s Cup, but of equal significance it will look carefully at ways to encourages growth throughout such a large sporting pyramid.

In parallel with the Yacht Racing Forum, the Design & Technology Symposium will take place on Monday 28 November. This will once again be hosted by Seahorse USA correspondent Dobbs Davis and will focus on technological developments, including safety innovations, foils and flying boats and rigid sails. There will also be a look into the crystal ball to see what new construction materials may be on the horizon.

‘Our future arrangement should deliver added value to all those involved in either event,’ says World Sailing CEO Andy Hunt. ‘Commercial partners will benefit from better visibility while attendance at both conferences will be boosted. A joint event will combine the institutional side of the sport with its business, participant and commercial activities. The new format will further stimulate debate, networking and business ahead of World Sailing’s own decision-making international meetings.’

Involved alongside the Yacht Racing Forum since its debut in 2008 in Monaco, the sport’s governing body recently laid out its own two-year modernisation draft. The new partnership with the Forum is part of this commercial strategy, aimed at strengthening the ties between World Sailing and as many of the key actors as possible across this incredibly diverse sport.

‘The Yacht Racing Forum is important for the entire international yacht racing community and we are delighted to accelerate our involvement’, adds Hunt. ‘The Forum pulls together the most active participants from all around the world and so gives us the opportunity to meet people and organisations who aren’t necessarily in regular touch with the federation.’

A nice place too
Co-hosted for 2016 by Yachting Events and Yachting Malta, Yacht Racing Forum 2016 will take place at the Grand Hotel Excelsior Hotel. Situated some 80km south of the toe of Italy, Malta is a beautiful venue and easy to reach thanks to its well-served modern airport. Two languages are in use among its 450,000-strong population – Maltese and English – and this southern European island boasts a fine climate as well as wonderful waters for sailing, cruising and yacht racing. Sadly, not something that our delegates or speakers will have time for during this particular visit…