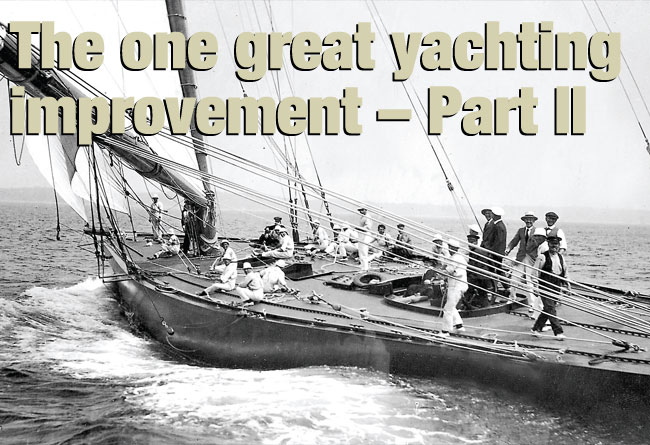 The contestants in the 1920 America’s Cup may have shied away from the much anticipated switch from gaff to Marconi rigs, but already the tide of technology was turning. John Rousmaniere recalls a very different age...

Following an unprecedented – before or since – rig development truce between the two contenders for the 1920 America’s Cup, Resolute’s amateur skipper, the 52- year-old Charlie Adams, did not hide his relief at having dodged a bullet.

It looked more than likely that designer Charles Nicholson had already made big strides with a planned switch to a new Marconi rig for Thomas Lipton’s challenger, Shamrock IV, a switch that would have left the New York Yacht Club defender with a considerable amount of catching up to do in a limited amount of time. But now Resolute and Shamrock would race each other under their existing gaff rigs… albeit with refinements, not all of which proved successful.

By the end of 1919 Shamrock had been laid up in Brooklyn for more than five years, following the outbreak of the First World War in 1914 while she was already en route from Europe. Though she was by now receiving a number of technical updates, Shamrock had never actually competed in American waters. Meanwhile, her opponent, Resolute, would come to the 1920 Cup Match with two successful summers of racing behind her during 1914 and 1915.