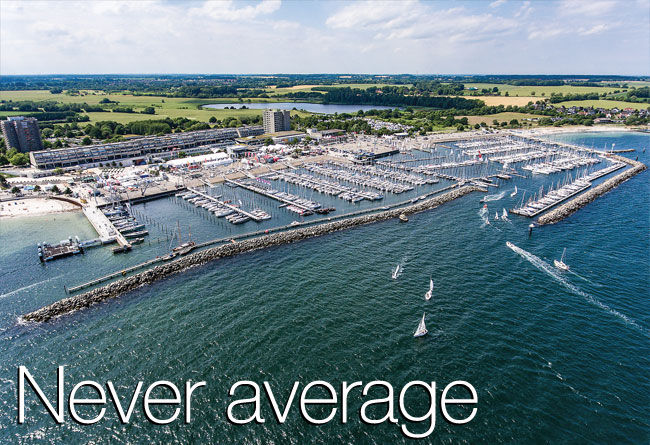 This year’s 134th edition of the largest regatta in the world delivered enough excellence on every front to be regarded as the best regatta in the world as well: competitive spirit, spectator interest, cultural activities, outstanding race management and a diversity of weather conditions, plus benefits such as an on-water repair service (from HSH Nordbank) and a daily weather briefing (courtesy of Boot Düsseldorf).

More than just a regatta, Kiel Week is the world’s festival of sail, with 4,000 participants from 50 countries and tens of thousands of spectators daily either performing themselves or enjoying the action via Kieler-Woche TV, from Audi, SAP reporting and tracking software, with commentary provided to the thousands of spectators wandering the shoreline. In all, Kiel Week attracted some three million visitors this year.

And while the hardware put on a great show, ranging from the latest carbon raceboats in the offshore classes, to the established but still nimbly fast Olympic and international dinghy classes, to the traditional sail training and classic classes traversing the Kiel Bucht, the real attraction was the talented software that came to Kiel to compete.

The level of prowess was impressive indeed, from Olympic athletes on their final performance before the main event in Rio, J70 keelboat champions on a quest for a European title, offshore sailors in search of the German ORC trophy… all capped with an amazing turnout of 96 hungry junior 470 crews from 15 countries.

Kieler Woche involves a huge programme on a scale that today is only made possible with the substantial and generous support which the event receives from the regional government of Schleswig- Holstein.

In the Olympic classes, world champs Peter Burling and Blair Tuke won the 49ers without needing to sail the Super Sunday medal race. With this win the Kiwi pair extended their winning streak to 27 major regattas and so travel to Rio having gone unbeaten since they took the silver medal at London 2012.

In contrast, the title of 470 Junior World Champion was much more uncertain, and was not decided until the last downwind leg of the final race. Series leaders Keiju Okada and Naoya Kimura from Japan were in eighth place for much of the way around the course – not enough to win the title – but some clever sailing on a thrilling last downwind leg advanced them two places to sixth, just enough to secure the title. 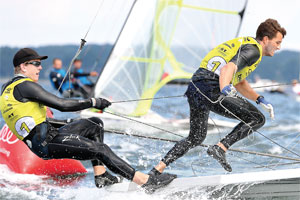 Above: 27 and counting... Burling and Tuke in action at Kiel. Other happy victors (below), 470 Junior Women world champions Depares and Martin (ESP) 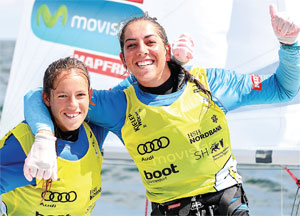 The J70s were appearing in Kiel for only the second time, yet 91 entries turned up to compete for their second European champion - ship. The racing was ultra-comp - etitive, with many of the favourites falling to starting line infractions and other problems. The eventual winner is relatively new to sailing (three years’ experience) and new to the class (two months in the boat), yet kept clear of these problems to emerge as a surprise contender. In truth, the winning skipper’s genetics may have given her a slight edge: her father won the ORC World Championship here in 2014.

‘I never expected such a good result here,’ said Claudia Rossi from Italy, daughter of multiple ORC champion Alberto Rossi. ‘We have only had the boat since February, but my crew are very ambitious…’

There was another close battle on the same course area as the Junior 470s in a non-Olympic class that remains popular throughout Germany: the Contenders. ‘This class is flourishing in Germany where there are now a lot of young guys sailing the boat,’ said Soren Dulong Andreasen from Denmark, eventual class champion after a week of fighting with Jesper Nielsen from Germany. ‘They like the boat because it gives you so much back the more you practise.

‘For many of these guys the Laser, for example, is too simple. The Contender is hard to sail and even in light winds you are powered up and trapezing, so it is good on the lakes too. They have over 200 boats active in Germany and so weekend regattas there are getting 45 boats easily.’

Finally, after completing some short offshore and coastal courses, the inshore portion of the German offshore championship was also held in Kiel Week, attracting not only the best in Germany but teams from outside the region as well. One was 86-year-old Piet Vroon from Holland, winner of the 150-mile overnight race on his Ker 51, his crew competing at Kiel for the first time. Vroon’s team have another full season ahead including Cowes Week… where Vroon first raced in 1952.

‘We had wonderful weather and we went fast,’ Vroon reported. ‘It was quite a complicated course. It was a good sail and we won handsomely on corrected time. The regatta has a good reputation and I wanted to come here and see it. If I did not do it now then I might never have been able to again!’

Vroon and his team won this battle, but it was Axel Seehafer’s Soto 40 that won the war, crowned champions in ORC I, while Max Gurgel’s XP-44 did the same in ORC II and Jascha Bach from Amsterdam won class ORC III-IV with his Italia 9.98.

So, if being part of the world’s largest regatta interests you, just set your calendar for the 135th Kiel Week over 16-25 June 2017.