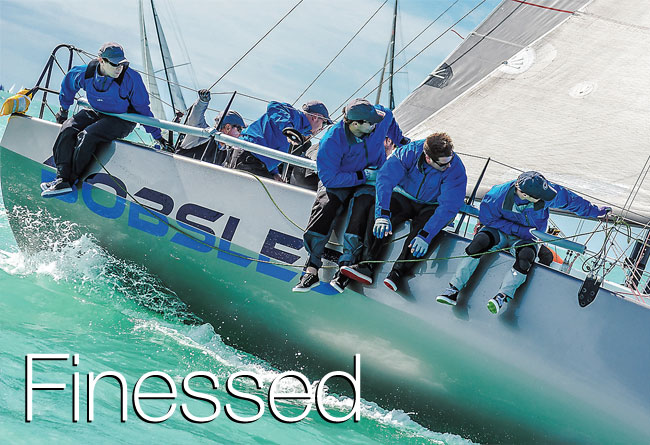 For 30 years racing at the tropical island of Key West has been a midwinter dream and a mainstay on the international calendar: while the rest of the Northern Hemisphere freezes the participants at Quantum Key West Race Week have enjoyed five days of competition in the warm blue-green waters at this ‘southernmost point of the USA’.

Main picture: Great boat and glorious Key West colours… 2016 saw the first class start for the new C&C 30, with Bobsled winning the prize for the best-looking paint scheme. The C&C 30s do seem to be edging ahead in the battle of the modern 30-footers that have appeared over the past three years. We look forward to hearing the reports after their first proper offshore contest…

Within the first decade this event that started as a mostly fun series among casual racers has since seen the level of excellence in both competition and race management increase to where this is now regarded as one of the world’s top international regattas.

Last year’s 29th edition was managed for the first time by the Storm Trysail Club, who introduced some new features to help attract a growing audience of participants among both the serious and the casual handicap racers. These included a Navigator’s class for cruisers and multihulls who wished to race only once a day, and two new club classes to replace PHRF. Those features will return in January 2017, along with racing on three course areas for ORC, IRC and the numerous one-design classes who form the majority of entries.

Of these, the Melges 24s will be a showcase class in 2017, since they are coming off their world championship held several weeks earlier in Miami, with many expected to return to Florida to compete in Key West. And having attracted 54 entries from 11 countries this past year, the J70s are expected to offer another impressive turnout for 2017 as well. And as new emergent onedesign classes like the C&C 30s also grow and mature, they too are expected to appear in strength.

‘The new year’s season of racing absolutely starts for our class with Key West,’ said Dan Cheresh, owner-driver of his C&C 30 Extreme2 and the president of the C&C 30 class. ‘I’m from Michigan, and I have to tell you there is nothing better than getting on the plane to escape to Key West in January. We have several days to train and race in the warm weather, a fantastic race committee laying good courses, and the winner of the class is always whoever has sailed the best in our group. We also have a great time on shore so we are really looking forward to 2017.’

But Key West has never been just about top-end racing. The first entry for 2017 was JD Hill’s J122 Second Star, of Seabrook, Texas. ‘We’ve never raced there before but the regatta’s been on our bucket list for a while,’ said Hill. ‘We went down and checked out the 25th anniversary Race Week and said we’ll do this one day. It’s got warm water, which my wife wants, and it’s got good competition, which my crew and I want…’

Further up the size and performance scale, the next event will be a featured stop on the 52 SuperSeries tour, bringing not only the latest high-tech designs to Key West in the TP52 class, but all their assembled talent that makes this today’s most competitive grand prix class. The standards of race and event management required by this class are among the most demanding in the world, so it’s a nice endorsement to have Key West as a regular stop on their world tour.

TP52 class manager Rob Weiland is also a fan: ‘This is the perfect place for our group. There is a long week to have a wide variety of conditions, the owners and the crews really like the ambience here. Plus everyone has fun being part of a larger event with the other boats and their teams.’

In a quest to further improve the shoreside experience at the 30th anniversary event, event managers with the Storm Trysail Club have decided to move the race village to a large interior space at the Waterfront Brewery. This is not only closer to where most of the boats are moored in the Key West Historic Seaport and Bight, but the new location will give more control during poor weather than the previous outdoor space. This site will also offer other features for delivering better entertainment for the sailors and sponsors, such as a large open stage for awards, multiple screens for photo and video entertainment, dedicated areas for sponsor lounges, and several bars set up to help quench post-race thirsts.

‘We learned a lot in our first year of managing Quantum Key West,’ said event chairman John Fisher from Storm Trysail, ‘and the feedback from our entries was both positive and constructive on how to improve. We’re pleased to act on these ideas, and are also pleased about the ongoing support from our most important sponsors, like Quantum and the Florida Keys, who continue to share our vision of delivering the best possible racing on the water and shoreside fun off it.’