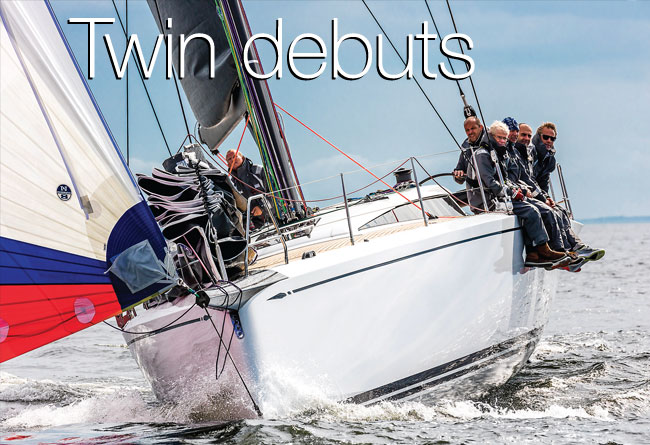 Previously, if you wanted lightweight rigging without compromising on safety, Future Fibres’ ECsix was your main option. No longer – buyers of a new Southern Spars rig can now opt for ECthree, chosen as the new ClubSwan 50 class rigging, bringing the benefits of multi-strand carbon rigging to yachts that don’t require the ultimate performance of ECsix.

Main picture: a major further endorsement of a proven concept… Having observed the widespread success of ECsix carbon rigging – including on the fleet of Volvo 65s and all but one current TP52, Nautor were confident enough to specify the new more accessible ECthree system from the start for their new ClubSwan 50, a boat that is central to the company’s future plans 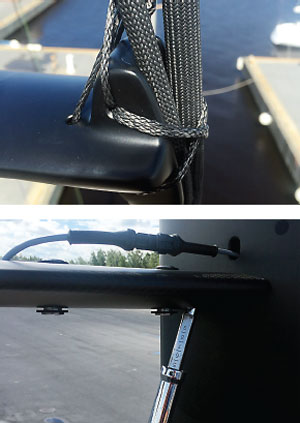 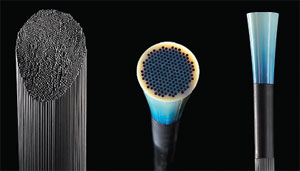 Top: the first ClubSwan 50 uses ECthree standing rigging throughout. Above: early composite rigging used solid rods – brief attempts glueing these ‘parallel’ rods into tubular end fittings soon gave way to resin ‘pots’ inside a metal cone. With ECsix and ECthree, the use of much finer bundled carbon rods means that the ‘potting’ process becomes a great deal easier and more efficient since the numerous small rods are now themselves splayed out within the metal cone

Why ECthree?
Future Fibres, Southern Spars’ rigging division, has been very successful with ECsix, which has become the world’s favourite carbon rigging product. The benefits of the multi-strand carbon configuration are well documented – saving up to 70 per cent of weight compared with traditional Nitronic rod while extending the longevity and durability of composite standing rigging cables. But this high performance came at a price normally not suited to smaller yachts – so Future Fibres decided to take what it knew about carbon rigging and produce a system that better suited yachts with lower performance criteria.

Sam Watson, CEO of the Southern Spars Group, explains. ‘The brief for the creation of the ECthree product was clear from the start: we wanted to make carbon rigging accessible to the sub-60ft racer-cruiser market. Previously, carbon rigging, including our own ECsix rigging, could only be supplied at a cost that was out of line with the budgets that these customers were working with.

‘To find a more economic alternative that still delivers many of the same benefits we started with a blank sheet of paper plus a pool of proprietary technology that we knew would get us there.’

The first yachts to give ECthree a workout are the brand new ClubSwan 50 line, the latest and most innovative addition to the hugely successful Nautor Swan stable. From the drawing board of Juan Kouyoumdjian, the ClubSwan 50 is a high-tech, aesthetically captivating one-design yacht.

It aims to appeal to the young and competitive, while still allowing the pleasure of cruising in the true spirit of Swan. It is the perfect match for ECthree.

What’s the same?
The fundamentals of ECsix are all there. ECthree is still a carbon-fibre multi-strand rigging system, which gives it the lightness, strength, flexibility, durability and impact resistance that made ECsix the proven success that it is.

Multi-strand construction means having many individual pultruded carbon rods, which are bound together using a braided cover and terminated with either a resin cone or a laminated eye.

Using a composite of numerous fine carbon rods means the completed cables can be bent, coiled, stretched, compressed and impacted millions of times without damage. It is technology available only to Future Fibres, and sets their products well apart from the competition. The development of this product would not have been possible even three years ago. But Southern Spars has been investing heavily in R&D and design to make these big leaps forward.

Scott Vogel, Southern Spars’ chief of technology, says, ‘With the commitment to incorporate the key elements of ECsix and use existing termination technologies, finding the appropriate raw materials that fit the positioning brief was critical. First off, the R&D team identified fibres that had the combination of strength, stiffness and cost to fit the targeted pricing proposition.

‘Samples of the leading candidates were then tested for processability as well as physical properties. Two fibres were finally selected, ensuring that the product would enjoy redundancy of supply.’

While not quite matching the unique performance benefits of ECsix, the improvements over rod rigging are substantial. Reducing weight aloft increases righting moment and decreases pitching moment – so ECthree makes you faster and more comfortable under sail and improves the roll motion at anchor. Weight removal aloft can also deliver fuel savings, making longer passages more economical as well as more comfortable.

What’s the difference?
Firstly, there’s a lower price as a result of designing a rigging product specifically for this market. Nick Christensen, Future Fibres’ Design Manager, says every step in the end-to-end process has been considered in the development of ECthree. ‘In essence we have reviewed every single aspect of design and rigging manufacture to create the ECthree system. The first carbon rigging product designed specifically for yachts with three spreaders or fewer under 60ft,’ says Christensen.

This started with design. Future Fibres automated the design process with their own rigging design tool, codifying the engineering so that the design goes straight from input to output. This reduces design time significantly, making this part of the process up to 10 times faster than before.

Then they searched the world for the best-value carbon fibre that still offered the stiffness and weight properties required, but working without the same restrictions on diameter that would limit your options in the grand prix world.

For the development of ECthree Future Fibres’ choice was a standard-modulus fibre as opposed to the intermediate-modulus carbon used in ECsix. These carbon rods were then pultruded at our own facility using a recently completed new fast-pultrusion machine. The combination of the new fibre and a faster pultrusion process allows ECthree to deliver a more accessible product to a wider market.

Next they terminate most of the cables using the proprietary CarbonEye termination system. This solution was originally developed for the high-end race market and was first trialled on several of the latest generation Imoca designs.

It enables a significant reduction in the metal component of ECthree, further reducing weight and simplifying interface componentry between the mast and boat… and so reducing cost even more.

Finally they adopted the Stacked Shroud system developed by Future Fibres to consolidate bundled rigging ‘rods’ into a single harness.

This simplifies the construction methodology, reducing the assembly time and increasing manufacturing efficiency.

Available exclusively on a new build Southern Spars mast, ECthree now allows yachts up to 60ft in length to unlock the performance and comfort benefits associated with the upgrade to multi-strand carbon rigging, while remaining within the tighter budget parameters of many of the projects in this size range.