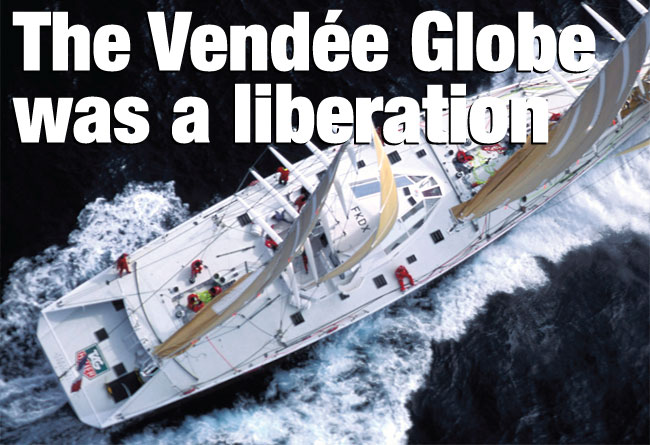 Titouan Lamazou won the first Vendée Globe 26 years ago on his Bouvet Petit-designed Open 60 Ecureuil d’Aquitaine II, completing the new course in 109 days, just 14 hours in front of Loïck Peyron’s Lada Poch. A lot has changed since then for a legendary seaman and solo racer who has since become a widely successful painter… as Jocelyn Blériot found out

Project yourself back to an era when names and brands such as Jeantot, Ecureuil, BOC, Aquitaine and Crédit Agricole were hot topics on the pontoons. Solo transats were a well-established institution already, but singlehanded multi-ocean racing still a bit of a rarity. Adventurers looking to push the boundaries and trying to find sponsorship for epic journeys had to find a narrative playing down a string of resounding technical failures, and convince funders that, no, they were not fundamentally deluded or suicidal. Out of this creative and adventurous period emerged a modern-day Golden Globe, which became a legend in its own right: a few months before the start of the eighth edition of the Vendée Globe we caught up with Titouan Lamazou, its very first winner.

‘The Vendée Globe has been a very important part of my life, but I have to say that I don’t know any of the current participants… probably apart from Jean Le Cam.

‘I’ve been out of professional competitive sailing circles for about 20 years, Jules Verne Trophy excepted [ed: Titouan was part of the original founders’ group, and is still part of the Jules Verne Trophy board]. But every four years I’m drawn back to the Vendée as I get media requests to reminisce about the first edition, and I’ve been to quite a few starts. Having said that, I don’t follow offshore racing that closely, but am interested in the technical developments.’