Modern honeycombs
Coming to a TP52 near you... PETER KRASS looks at recent advances in pre-formed and over expanded Nomex cores from Schütz in Germany

The long game
The SYZ&CO foiler project has been a slow starter in terms of outright pace, but this clever and well-resourced Swiss team is playing for higher stakes...

In tune with the times
The demand has been growing so designers AXEL DE BEAUFORT, GUILLAUME VERDIER and project director CORENTIN DOUGUET decided to respond...

Update
TERRY HUTCHINSON prepares to go big cat racing for real, GIULIANO LUZZATTO greets the European arrival of the iconic Wianno Senior and DOBBS DAVIS gets to know some of the new faces behind the World Match Racing Tour

Rod Davis
And things seem to be getting about-face...

Design – Modern classic
Though still developing ideas for Oracle Racing, PAUL BIEKER has got some time back to give us the boats that we have been missing, including an all-new version of a great all-round performer

Seahorse build table
– Multi-facetted
RODGER MARTIN and his engineering director ROSS WEENE really have turned out a silk purse... plus their ‘new’ 30-foot sharpie is looking ever sweeter

Below: Three eras in performance sailing. Charles Currey (inset) rigs one of the first Fireflys in 1946 – the first mass-produced boat designed for towing. Two years later Paul Elvstrøm will take his first Olympic medal in this class. And (left) the AC45 hard wing cat sandwiches – in several senses – two New Zealanders training in their 470... designed during 1963 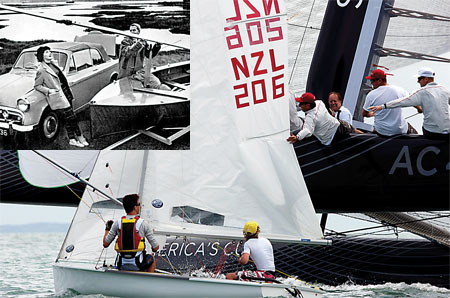