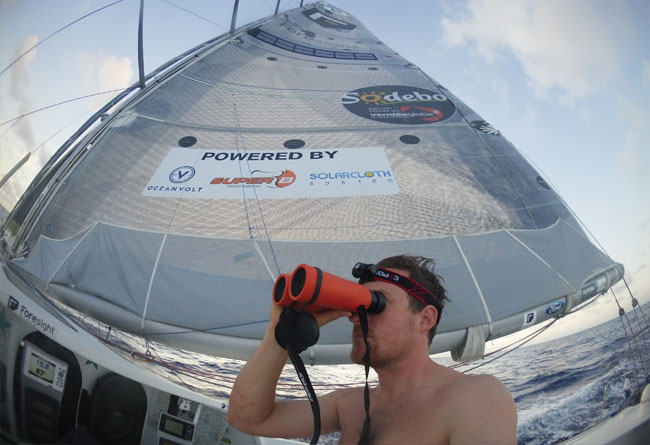 But where do you start? Vendée Globe competitor Conrad Colman has been among a handful of committed early adopters showing what is already possible – and without sacrificing any competitive performance

Conrad Colman’s 16th place Vendée Globe finish in 2017 was remarkable for many reasons: not only did he bring home his boat to a huge public welcome after losing the rig mid-Atlantic, but less well known perhaps is that he made it around without fossil fuels of any kind. And he wants to do it again.

‘I wanted to be the first sailor to complete the lap without burning fossil fuels,’ says the Lorient-based Kiwi. ‘Raphaël Dinelli tried in 2008 with Foundation Océan Vital, Javier Sanso’s Acciona in 2012 really advanced the thinking in terms of renewables. Sadly neither finished the race. So given the efforts by others to tackle this technological challenge I was delighted to have been the first to pull it off.

‘Even before I had a sponsor active in the renewables sector, I ripped the diesel engine out of my boat,’ says Colman. Look at his website (conradcolman.com) and you’ll find a revealing choice of quote, by Eleanor Roosevelt: ‘The future belongs to those who believe in the beauty of their dreams.’

Colman is a true believer and, with a will like that, a fossil fuel-free circumnavigation was always on the cards. ‘I replaced the engine with an electric motor from Finnish company OceanVolt, batteries by Super B in Holland and solar panels from Italian company Solbian. I also trialled prototype thin-film solar panels from a company in southern France, but they are not yet a mature technology and failed after a couple of days. It clearly takes an international effort to go green!’

Main picture: Conrad Colman in his full Horatio Nelson mode before he lost his rig… but still made it back to the Vendée finish without any assistance. Colman had made a deep commitment to avoiding fossil fuel use and his lead is now being picked up by several new projects all benefiting from the focused support of 11th Hour Racing

Colman has proved it is possible to sail around the world without fossil fuels, but how much power was he generating? ‘The electric system from OceanVolt worked flawlessly, and I was one of the only boats in the fleet with a power source – using the engine as a generator – that could charge at over 20kt of boatspeed, and at that speed it generated 8kW... so much power I could have run the average American home!

‘Charging became strategic and I could replace 24 hours of consumption in only 15 minutes with the motor on recharge mode, with the propeller slightly opened to spin the motor,’ adds Colman.

‘During the day the 400W of Solbian panels could carry the base load consumption of the boat and also top up a little. The result was that I had about a week's autonomy stored in the batteries and didn't have to constantly worry about when I would next charge.’

So what will be the breakthrough that promotes the widespread adoption of renewable energy in offshore racing? ‘There doesn't need to be a breakthrough,’ Colman replies. ‘The technology is already on the shelf and selling to the regular leisure market.

‘Electric motors are simpler and more reliable than diesels – the newest models from OceanVolt are weather sealed to the point they will even work underwater. Now we need to optimise the installation so it doesn’t weigh more than a classic system,’ he explains. ‘As technology progresses batteries will become lighter and more userfriendly before the next Vendée.’

Has Colman ticked the box on fossil fuel-free sailing? ‘Absolutely not; I am currently putting together a new programme for the next Vendée Globe,’ he reveals.

‘I am in talks to renewables companies about using this as a platform to promote the new energy era. Having a boat that is constantly charging and is able to store sufficient energy to avoid a daily charge actually frees up a lot of mental space for the skipper to focus on other elements.’

Will we ever see renewable solutions for cruising boats, with air-cons, entertainment systems and toys? ‘Any sailing boat using good hydrogenerators can now meet its energy needs while sailing, especially any kind of performance boat,’ replies Colman. ‘For the moment a hybrid system with electric propulsion and regeneration, and a diesel generator is probably a good intermediary step, much as it has been with cars...’

The wider picture
Shifting the conversation from competitors to organisers, where do you start if you want to create a sustainable, carbon-neutral event? You could follow the lead of the Atlantic Cup, which in 2012 became the first carbon-neutral US regatta… ever.

‘The Atlantic Cup is the longest race on the US east coast, and the only dedicated Class40 event in the US,’ says Manuka Sports Management’s Julianna Barbieri. ‘It’s a double-handed race held every other year. Teams race from Charleston, South Carolina to New York City, then to Portland, Maine. There the teams convert to fully crewed mode and race a two-day inshore series in Casco Bay.

‘When we created the Atlantic Cup in 2010-11 we knew that we wanted to make sure our operations were not leaving a negative impact on the planet,’ Barbieri continues. ‘In partnership with 11th Hour Racing we started devising ways to implement sustainability solutions into every area, from working with caterers and waste management to communications. We changed our thinking right out of the gate.’

Offshore, all skippers are required to use renewable energy – hydrogenerators, solar or wind, for everything but propulsion. Most choose solar over hydrogenerators with some skippers voicing concern about drag. Single-use water bottles are prohibited by the NOR, with skippers encouraged to use their water tanks – in practice most skippers prefer water containers which double as moveable ballast.

The carbon footprint of the event in 2016 was 29 tons, broken down into transport (73 per cent), events (17 per cent), accommodation (four per cent), offices (three per cent) and waste (three per cent). To be carbon neutral the remaining carbon has to be offset. Since 2012 the event has offset 95 tons in total.

One step at a time… though there were previous attempts to complete the 27,000nm Vendée Globe course with no use of fossil fuel the first to take full advantage of modern developments in green power was Javier Sanso who raced the 2012 event on this Owen Clark design comprehensively fitted out with a sophisticated package of solar and hydro power generation and the most advanced storage systems of the day. Sadly Sanso was dismasted late in the race – but at least he hadn’t burnt any fossil fuel… 11th Hour co-founder Jeremy Pochman sums it up: ‘Identify each challenge, define an achievable set of objectives, then put your ideas into practical and sustainable solutions. Do the best job you can and then mitigate the rest… one step at a time’ 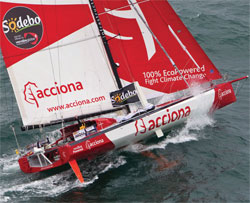 ‘Our carbon offset partner, We Are Neutral, calculated and offset our footprint,’ says Barbieri. ‘The offsets were used to retrofit lowincome housing in the southeast US with energy-efficient lighting. The cost of offsetting 29 tons of carbon to make the 2016 Atlantic Cup carbon-neutral was US$300-500. It’s really not that expensive.’

The end result was an event that was fully compliant with ISO20121, the event standard pioneered by the 2012 Olympics. ‘Being ISO20121 compliant not only holds the Atlantic Cup to a very high standard in terms of environmental responsibility, but it shows race organisers that it is possible to implement sustainability into their events without busting the budget. And it demonstrates to every type of sailor that they can adopt small changes that collectively over time will have a positive impact on our planet,’ says Barbieri. ‘It’s our hope that our efforts are inspiring change throughout the sport – to make a difference we all must do our part.’

Barbieri also drafted the sustainability strategy for Vestas 11th Hour Racing’s Volvo Ocean Race entry. For the team Barbieri’s plan touched on every area of impact relating to its carbon footprint. Throughout the Volvo race the team is tracking all travel, accommodation, electricity, water consumption and waste, to calculate their carbon footprint. The carbon impact will be offset at the conclusion of the event with the Ocean Foundation’s ‘blue carbon’ credits project, SeaGrass Grow.

Even in the details the team sought out partners with a strong environmental commitment: Karün sunglasses, made from recycled fishing nets; Aethic sunblock, with a formula that is coral compatible. Challenged by the team, clothing supplier Musto even reduced by 70 per cent the plastic used in the packaging and delivery of their Volvo Ocean Race Collection. Onboard, they use a desalinator for fresh water generation while onshore Bluewater filtration units provide for all water requirements.

The team sources food locally onshore, operating a ‘meat free’ Monday, onshore and at sea (surprising factoid… a tomato requires 13 litres of water to grow, making a hamburger takes 2,400 litres). Staff share transport ashore while flights are obviously mitigated as much as possible. The goal is to have a 75 per cent landfill diversion rate; all food scraps from operations on land are composted, and as is – or by now should be – today’s norm all food packaging comes back ashore for recycling.

11th Hour Racing have inspired other events to go carbon neutral as well: take a look at the successes of the 52 Super Series which has offset 248 tonnes of carbon through a portfolio of development projects managed by ClimateCare… and, on a much smaller scale, the 2017 Vineyard Cup, which offset its carbon footprint for just US$10!

Going carbon neutral is the right thing to do. Protecting and restoring the health of our oceans is one race none of us can afford to lose. It requires only the will to change and some forethought. Start by developing a strategy, learn from the many available resources online, seek assistance from organisations specialised in carbon offsetting and start tracking! The clock is ticking.