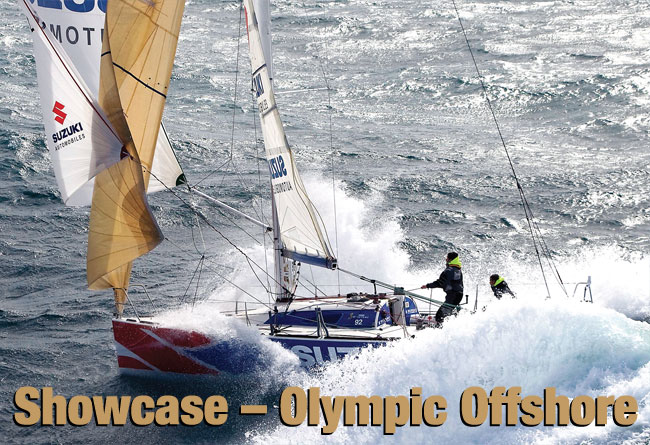 One century ago the International Twelve Metre Class was raced in the Olympic Games (1908, 1912 and 1920). Olympic keelboats got smaller over the years and eventually were phased out altogether for the 2012 and 2016 Games. Last year the International Olympic Committee invited World Sailing to propose a new Showcase Event to be held alongside the Olympics for Tokyo 2020. After a vote by the 41 members of the World Sailing Council it was decided to present submissions to the IOC for two events – one kiteboarding and one offshore. Either, or both, of these proposals could be approved. World Sailing will send in its formal decision after a Council meeting scheduled for May 2017.

For offshore sailors this provides a unique and exciting opportunity. The Offshore and Oceanic Committee spent several months working on its proposal. The proposed number of boats entered would be 18-20. There would be two crew on each boat, one man and one woman. The mixed-crew format proved very successful in Rio in the Nacra 17 class.

Part of the vision of the Offshore Showcase Event is to attract well-known offshore sailors from round-the-world races and other major events. This would add to the excitement at the Olympics.

The Offshore Committee also debated whether the athletes should be from the pool of qualifiers from other classes or different sailors? This will be discussed over the next few months.

Every sport works hard to attract their top athletes. Sailing currently awards medals for 10 Olympic classes; it is important to note that a ‘Showcase Event’ is not an official Olympic event, but a development concept for the future.

One of the factors that worked against keeping keelboats in the recent Olympics Games was the perceived high cost of purchasing and campaigning these boats. The offshore proposal calls for using manufacturer-provided boats. This will keep the cost low. At this early stage the choice of boat is not as important as the format of the event. The vision is to use a boat that is 9-12m in overall length.

The event would have a marathon feel to it with continuous racing for three to four days. Each boat would carry a tracker and video to feed position and images 24 hours per day. The onboard robotic cameras would be mounted in strategic spots on deck, and include microphones. The conversation when both crew are on deck would be fascinating. Viewers might just keep watching, especially when the raceboats are close. Specific images of each boat would be available on the internet so you could follow your favourite team.

The course would feature beautiful backdrops against the mountainous Japanese coast. The race committee would have the option of changing the length of the course, depending on the wind strength, so that the fleet would finish in the daylight. The finish line could be set right in the Olympic harbour. Considering how close the finishes are on the long legs of the Volvo Ocean Race, the final result could come right down to the wire.

Sailing fans would be able to tune in to the race at all times. There would never be any time zone issues. Using the example of other major offshore races like the Volvo Ocean Race, Vendée Globe, or races to Bermuda, around Fastnet Rock or to Hobart, there is a large following on all social media platforms who now watch these races.

In a nod to the future, electronic umpires could be introduced, so protests and penalties would be decided during the race, prior to the finish. The first boat across the line would be the winner.
Stan Honey – Chairman, Offshore and Oceanic Committee
Gary Jobson – Vice-President, World Sailing